May 2012 Shows A Small Increase of 2.4% In New Foreclosure Filings In Chicagoland

According to data compiled by the Illinois Foreclosure Listing Service (ILFLS.com), foreclosures are back up again for May 2012 in all seven Chicagoland counties compared to May last year and to April 2012. The total number of home foreclosure filings for the seven counties for May 2012 reached 6,436, a 2.37% from April this year. 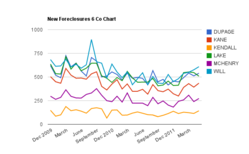 Foreclosures are back up again for May 2012, especially for the seven counties of Cook, Will, Kane, Kendall, Lake, McHenry, and DuPage overall according to stats compiled by ILFLS.com, the Illinois Foreclosure Listing Service. Clearly, the April 2012 decline of foreclosure filings in the Chicagoland area was just temporary. According to the data, property foreclosures have increased overall in the Chicago area compared to last month, April 2012, and compared to last year, May 2011. Nationally, Illinois is ranked the state with the 5th highest foreclosure rates following Georgia, Arizona, Nevada, and California.

In May, six of the seven Chicagoland counties showed an increase in foreclosure activity compared to April 2012. The total number of home foreclosure filings for the seven counties for April 2011 was 6,287. This is moderately lower than the total for May which reached 6,436. This is an overall increase of a little over 2% compared to last month. The largest increases from April to May were seen in the counties of Kendall, McHenry, and Kane. In Kendall County, foreclosure filings jumped from 393 in April to 435 in May accounting for over a 10% increase in filings. Filings in McHenry in April were 240 and increased 14% to 273 in May. The largest increase was seen in Kane county going from 115 in April to 143 in May; this was over a 24% increase.

Lenders have initiated foreclosure filing processes against thousands more Chicagoland homeowners in May. This will likely result in an increase of short sales and property repossessions. That being said, it is unfortunately likely that home values will continue to be bogged down in upcoming months.

The Illinois Foreclosure Listing Service (ILFLS.com) is a Chicago-based subscription service that provides up-to-date data on foreclosure filings and related activities throughout the Chicago area, including Cook, DuPage, Lake, Will, McHenry, Kane and Kendall Counties. ILFLS recorders are assigned to every courthouse in the coverage area, which they visit daily to collect the latest data. ILFLS provides a searchable database and a broad array of productivity tools, all designed by and intended primarily for real estate professionals.