Beginning July 19, a collection of Gomel’s images will be exhibited at the Pictures Plus gallery. Collectors and enthusiasts are invited to a reception with Gomel that evening. 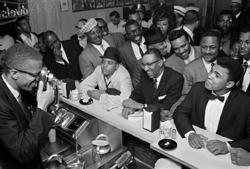 "People young and old still care about the 1960s and Bob’s images remain of interest to collectors, news organizations, historians, and galleries and museums."

The triumphs and tragedies of the 1960s provided photographer Bob Gomel and his LIFE magazine colleagues extraordinary opportunities to advance American photojournalism.

Gomel said, “LIFE was the world’s best forum for photojournalists. We were encouraged to push creative and technical boundaries. There was no better place to work in that extraordinary decade.”

Beginning July 19, a collection of Gomel’s LIFE images – as well as featured recent work – will be exhibited at the Pictures Plus gallery at 115 Hyde Park Boulevard in Houston. Collectors and photography enthusiasts are welcome to attend a gallery reception at 7 p.m. that evening. To attend the reception, please call 713.524.6913.

The “Multiple Exposures” exhibition includes images of presidents John F. Kennedy, Lyndon B. Johnson and Richard Nixon, The Beatles and other entertainers, and sports figures such as boxer Muhammad Ali, and golfer Arnold Palmer, and the 1963 Freedom March in Washington. An image of activist Malcolm X photographing victorious Cassius Clay in Miami was acquired by the Library of Congress permanent collection.

Unpublished images in the exhibition include Kennedy emerging from America’s first space capsule at the Johnson Space Center in Houston, The Beatles in Miami, and 90 heads of state gathered around the catafalque at the Kennedy funeral. Gomel’s recent images, which he refers to as his “AfterLIFE” collection, include photographs from around the world and mural-sized watercolor treatments.

Two images in the exhibition were among the first multiple exposures published as photojournalism by LIFE. Another image, a 1969 cover shot of president Dwight Eisenhower lying in state, was the first photograph taken from the dome of the U.S. Capitol Rotunda and fired remotely by wire to a foot switch from 280 feet below.

Dennis Murland, the owner of the Pictures Plus gallery, said, “People young and old still care about the 1960s and Bob’s images remain of interest to collectors, news organizations, historians, and galleries and museums. We are pleased to be his partner in this exhibition of his LIFE images and his dynamic recent work from around the world.”

Gomel said, “LIFE fostered the popularity and evolution of photojournalism in the 1960s. Through double exposures, remote cameras placed where no human being could be, adapted equipment, and other techniques, we tried to reveal what could not ordinarily be captured on film.”

Born in New York in 1933, Gomel earned a journalism degree from New York University in 1955 and then served as a U.S. Navy aviator. Gomel joined LIFE in 1959 and shot for the immensely popular magazine for a decade. He later shot national advertising campaigns for Audi, Bulova, GTE, Merrill Lynch, and Shell Oil, among others.