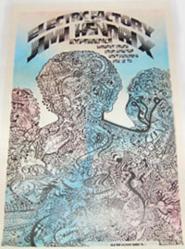 The Hendrix Electric Factory concert poster was produced by an artist named Strange.

Avid 1960's poster collector Andrew Hawley, from Vintage Rock Posters, announces his search for vintage Jimi Hendrix 1968 Electric Factory Philadelphia concert posters. The concert was held on February 21 and 22, 1968. According to Hawley, “The Electric Factory had previously been used as an old tire factory. Herb Spivak and his brothers Jerry and Allen opened the Electric Factory, which became one of Philadelphia’s top venues or rock music in the 1960s. They brought in Larry Magid to manage the club. The Mothers Of Invention, Country Joe and the Fish, The Cream, and Jimi Hendrix Experience played at the Electric Factory.”

Hawley continues, “The Electric factory used marquee style posters and flyers to advertise the upcoming acts. The Hendrix Electric Factory concert poster was produced by an artist named Strange. The beautiful poster was printed on thin glossy paper and features a colorful outline of Hendrix using an imaginative array of lines and shapes. The poster is great example of 1960s psychedelic artwork. There are no printing credits on the poster so they were most likely locally.” For more information go to, http://www.vintageconcertposterbuyer.com/gallery_hendrix.html.

Hawley will pay $3,000 cash for the Jimi Hendrix 1968 Electric Factory poster or any other 1967 through 1970 vintage Jimi Hendrix concert posters. Any condition would be accepted. Please call 310-346-1965 or email andrew at vintageconcertposterbuyer.com.