In an effort to protect the integrity of one of Panama's most important historical sites, Orgullo Panama, an alliance of eleven Panamanian organizations dedicated to the protection of Panama's historical heritage, corrects mis-statements and omissions made by the Panamanian delegation to the 36th Session of the World Heritage Committee. 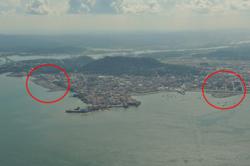 Work on the Cinta Costera III has already begun

"Casco Antiguo`s wall served since 1673 as protection, icon and birthplace of the Republic of Panama. To detach the wall from the ocean or modify its surroundings would fundamentally alter the context of the Site," says Pitu Jaen, of AVACA.

The eleven organizations making up Panama Pro Historical Heritage (Orgullo Panama Pro Patrimonio Historico) are making this public announcement in an attempt to correct serious omissions and misstatements of fact made to the World Heritage Committee today by the delegation of the Republic of Panama at the Thirty Sixth Session of the UNESCO World Heritage Committee in St. Petersburg, Russia.

The World Heritage Committee is currently considering issues related to the state of conservation of the Archaeological Site of Panama Viejo and Historic District of Panama. Central to the discussion of the Historic District of Panama (also known as Casco Viejo) is a coastal highway project (referred to as the Cinta Costera III) that would encircle the historic district, which is proposed by the Government of Panama as a solution to traffic congestion.

In light of statements made by the delegation of the Republic of Panama, we feel it critical to clarify the following:

1. The government delegation claims that the Cinta Costera III has not been started and that preliminary works near the historic district are simply new public areas that are unrelated. The fact is that the public areas are included in the contract between the Government of Panama and Norberto Odebrecht SA for the construction of the Cinta Costera III (Contract No.2010-0-09-08-LV-004339 Interconexion de La Avenida Balboa Con La Av. De Los Poetas), and that the Government of Panama has already issued the Order to Proceed with the entire project (Nota DM-DIAC-AAJCP-1140). Moreover, the government’s own website promoting the project to the Panamanian public clearly indicates that the landfills currently being put in place are part of the Cinta Costera (http://www.cintacostera.com).

2. The Government of Panama has justified the change from a tunnel, which would have little or no impact on the historic district, to a seafront highway as a measure to reduce costs. However, we note that the total cost of the seafront highway is currently budgeted at $782 million, which is in fact more than the $776 million contract awarded to build the tunnel. Accordingly, the seafront highway currently proposed by the Government of Panama is in fact more expensive than the original tunnel option, which was widely supported by the conservation community in Panama.

We regret the need to issue a public statement contradicting our public officials, however, we see no alternative under the circumstances, as the present administration has refused to invite reactive monitoring missions to directly observe the situation so a public statement is the only avenue available to the historic preservation community for distributing the facts. It appears clear to us from the discussions that the refusal to allow reactive monitoring missions has been a strategy intended to introduce confusion into the process. We hope for the sake of our site and all others around the world that this strategy will not be allowed to succeed.

Orgullo Panama is an alliance of fifteen Panamanian civic organizations dedicated to the protection of Panama’s cultural heritage.

Bid awarded for tunnelThe bid for the Cinta Costera III project awarded to Norberto Odebrecht SA by the Government of Panama was for the construction of a tunnel.