Paramount have teamed up with Look3D Eyewear and RealD to produce a collectors pair of Heart Shaped 3D Glasses for the opening of Katy Perry: Part Of Me 3D this week. 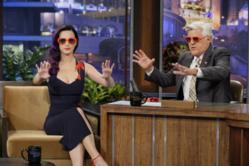 On a recent late night interview with Jay Leno, Katy showed off the new 3D glasses. Photo courtesy of Paramount

I thought it would be really fun

Katy Perry: Part Of Me is a 2012 3D documentary-concert film centering on the singer. It will be released in the United States, Canada, United Kingdom and Ireland on July 5, 2012 in RealD 3D.
For this occasion Paramount have partnered with RealD and Look3D Eyewear to produce some limited edition, Heart Shaped 3D Glasses shown on a recent late night interview with Jay Leno.