Software takes story structure and analysis to next level 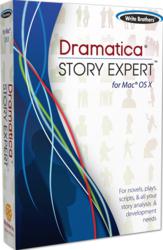 "...Dramatica is still the only tool that responds to writers’ choices, giving them customized direction and guidance for creating solid story structure."

Today, Write Brothers, Inc. announced the launch of Dramatica® Story Expert™, the next evolution of their popular story development software. The new product introduces a completely redesigned interface, support for the latest Mac OS X operating systems, and over 35 new features and enhancements. The software debuts “Gists,” a powerful new conceptual tool designed to enable writers to quickly zero in on a perfect structure for their story.

Gists are short phrases that illustrate one of Dramatica’s 148 structural terms. For example, “Abducting Someone,” “Winning the Lottery,” or “Stealing Someone’s Secrets” are just three of hundreds of Gists for the Dramatica concept of “Obtaining.” The Gists “Starting a Riot” or “Picking Victims at Random” are illustrations of “Chaos.” When writers are answering questions, they can search or browse Dramatica’s pre-defined collection of over 12,000 Gists. Choosing a Gist automatically selects the underlying structural concept, which helps define the story’s underlying argument. Writers can also easily create their own Gists and associate them with structural concepts and can even create collections of Gists that can be shared with other writers.

Besides lowering the learning curve for the new users, Gists also allow the immediate generation of easily readable story outlines and nearly three dozen reports on the story’s structure.
Chris Huntley, VP of Write Brothers, and co-creator of the Dramatica Theory, explains that “Dramatica doesn’t write the story – the writer will always have that job. But Dramatica is still the only tool that responds to writers’ choices, giving them customized direction and guidance for creating solid story structure, powerful characters, and rich thematic content. With the new Gist feature writers can better relate to Dramatica’s unique structural questions.”

About Dramatica:
First released in 1994, Dramatica occupies a unique position in the professional writing community. Informally known as “Hollywood’s Dark Program,” elite writers are uncharacteristically mum about their use of the tool, lest they disclose a unique competitive advantage. The software has previously been available on Mac & Windows as Dramatica Pro and Writer’s DreamKit. Information on the history and theory behind Dramatica can be found on http://www.dramatica.com.

Write Brothers currently holds four software patents. It holds two for Dramatica® , and one for the timeline-based presentation of text used in the Outline 4D™ outlining software. A fourth technology patent for the Streamline tool used by Movie Magic Screenwriter has just been granted.