Guests will receive a free Short Wave of O-rings with every Breaded Boneless Wings Compact Bucket purchase for a limited time. 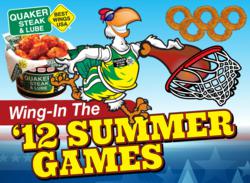 We’re excited to be with Lube Nation wherever they may be supporting the Summer Games!

The Award-Winning casual-dining concept Quaker Steak & Lube® is ready to go for the gold this summer during the 2012 Summer Games. From July 27th through August 12th, at any participating Quaker Steak & Lube® location, guests will receive a free Short Wave O-ring with a Dine-in, Pick-Up Wingo Window or Take-Out purchase of a Compact Bucket of Breaded Boneless Wings.

“We’re excited to be with Lube Nation wherever they may be supporting the Summer Games!”, said Marla Pieton, Senior Director of Marketing for Quaker Steak & Lube®.

Quaker Steak & Lube®’s resident brand champion Gizzard Coop™, who knows a thing or two about winning gold, has some advice for this year’s competitors.
1.    Eat a well-balanced diet of Wings, Steakburgers and Baby Back Ribs.
2.    Stay hydrated, especially when eating anything with a Scoville Heat Unit above 3,000.
3.    Always keep a Wing Wag handy to avoid getting sauce on your Quaker Steak & Lube® athletic gear.

While Quaker Steak & Lube® is known for its Best Wings USA and over 20 sauce varieties, Lubies love all of the gear we have to offer. Show your Lube Nation spirit by visiting http://www.lubegifts.com.

About Quaker Steak & Lube®:
Founded in 1974 and built in an abandoned gas station in Sharon, Pa., the original Quaker Steak & Lube® began as a cook-your-own steak restaurant, before expanding to over 40 locations throughout the United States and Canada. The unique décor, including race cars suspended from the ceilings, motorcycles, Corvettes and gas station memorabilia, combined with the crave-able food and high-octane events has afforded The Lube® a cult-like fan following. Today, Quaker Steak & Lube® has become one of the fastest-growing restaurant chains in the country, and has won hundreds of national and international awards for its wings and over 20 different wing sauces. Most recently it was named Festival Favorite at the National Buffalo Wing Festival in Buffalo, New York. For more information visit http://www.quakersteakandlube.com