The Rottenstein Law Group, which represents clients with claims stemming from the failures of defective hip replacement devices manufactured and sold by various companies, has learned of a voluntary recall—and halt of global production—of another all-metal hip replacement product, following discovery of “potential for fretting and/or corrosion that could cause pain, swelling and tissue damage.” 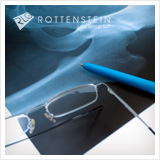 According to a MassDevice.com announcement, “Orthopedic devices giant Stryker announced recall of a pair of hip implants over concerns that the devices may be prone to ‘fretting and/or corrosion at or about the modular-neck junction,’ which may lead to pain, swelling and adverse reactions in surrounding tissue.”

The recall affects the company's Rejuvenate Modular and ABG II modular-neck hip stems, according to MassDevice, “and Stryker decided to terminate global production of the devices after discovering a potential trend in post-market surveillance data.” Stryker’s hip reconstruction vice president and general manager Stuart Simpson’s prepared remarks included the following statement: “While modular-neck stems provide surgeons with an option to correct certain aspects of a patient's anatomy and hip biomechanics, given the potential risks associated with fretting and corrosion at the modular neck junction, Stryker Orthopaedics decided to take this voluntary action.”

Rochelle Rottenstein, principal of the Rottenstein Law Group, implores anyone with a friend or relative who has received a dangerous hip implant or other medical device to reach out to that person and recommend that he or she consult a physician immediately and then speak to a qualified personal injury lawyer. The Rottenstein Law Group maintains a Stryker Rejuvenate Modular & ABG II Hip Implant Recall Legal Information Center at http://www.rotlaw.com/stryker-rejuvenate-modular-abg-hip-implant-recall/. (Attorney advertising. Prior results do not guarantee a similar outcome.)