When Bruce Springsteen and the E Street Band* go on tour, Columbus McKinnon’s American Made, CM Lodestar goes with them! 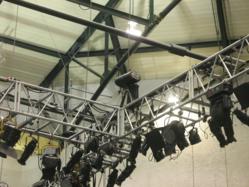 Our Lodestar hoists have been supporting the entertainment and other important industries with safe and productive, American-made lifting equipment for many years and for many years to come.”
Columbus McKinnon President/CEO Tim Tevens

As Bruce Springsteen and the E Street Band take their “Wrecking Ball Tour” across North America and Europe, thousands of fans know to expect a smooth-running, high-energy show. When Springsteen wails, “Born in the USA! I was born in the USA!”, thousands of fists rise in the air and thousands of voices sing along. This moment of musical magic doesn’t happen spontaneously. It’s supported by truckloads of equipment and tons of gear, including heavy-duty rigging hoists that are also born in the USA – nine 2-ton and twenty-five 1-ton Lodestar hoists, manufactured by Columbus McKinnon.

Bruce Springsteen’s organization is known for its attention to detail and requirements for high-performance components. So it’s no wonder their rigging crews select the superior design provided by CM Lodestar Chain Hoists. Lodestar hoists are known throughout the entertainment industry, from top-selling musical performers to international sporting competitions, for their strength, reliability, and quiet operation.

The Lodestar line has become the hoist of choice in entertainment due to four distinct design advantages. They meet international standards for quality, they provide quieter operation, they require less maintenance, and they offer easy access to the control panel for quick voltage changes.

The CM Lodestar is one of more than two dozen powered chain hoists, wire rope hoists, manual hoists, and rigging products that Columbus McKinnon makes in the U.S. The company is the only major manufacturer of American-made manual and powered hoist products. Columbus McKinnon has chain and forging operations in Tennessee, as well as hoist production facilities in Virginia, North Carolina and Ohio.

“We have focused on safe and efficient lifting for over a century and are proud of our achievements,” said Columbus McKinnon President and CEO Timothy T. Tevens. “It has been especially gratifying to work in the entertainment industry, where American quality and craftsmanship are recognized and rewarded. Our Lodestar hoists have been supporting the entertainment and other important industries with safe and productive, American-made lifting equipment for many years and for many years to come.”

Headquartered in Amherst, New York, Columbus McKinnon is a leading worldwide designer, manufacturer, and marketer of material handling systems and services, which efficiently and ergonomically move, lift, position, or secure material. Key products include hoists, actuators, cranes, and lifting and rigging tools. With a rich 135-year tradition, the company is focused on commercial and industrial applications that require the safety and quality provided by its superior design and know-how.

Columbus McKinnon, located in Amherst, New York is a leader in the materials handling industry