Ricardo Flores, A bronze foundry employee and close friend of the sculptors at Big Statues was killed Thursday afternoon when an explosion took place in a kiln-like device caused by an internal pressurized vessel. 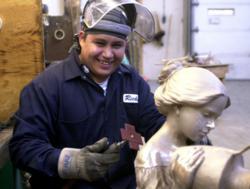 Flores was one of the best craftsmen in the industry, well-known for his unsurpassed finishing skills and attention to detail.

The explosion took place at the well-known Adonis Bronze Foundry in Alpine, Utah. Adonis Bronze is known for their castings of the Pro Football Hall of Fame busts including Steve Young, Dan Marino and John Elway.

The explosion happened when Ricardo Flores was placing a ceramic and wax sculpture into the Kiln to remove excess materials from the molding, which would have then been filled with bronze.

Flores was employed with Adonis Bronze for over 12 years as a welder and metal chaser. His smile and happy-go-lucky attitude will greatly be missed.

According to Matt Glenn, sculptor at Big Statues, "Flores was one of the best craftsmen in the industry, well-known for his unsurpassed finishing skills and attention to detail. Flores invested his heart and soul into every piece he created, always making sure the finished product was something both he and the artist could be proud of."

Each statue sculpted by Big Statues is taken from the molding phase to the finished product in the Adonis factory. Flores was involved in the casting of several of the latest sculptures created by Big Statues including the eight foot Spartan delivered to Fort Drum, New York last month.

The American Fork Chamber of Commerce is collecting donations for Flores’s wife and eight children. To donate, go to afchamber.org.