FIFA13.com, a news site dedicated in providing the latest news on FIFA 13, is offering a chance for fans to continue their global football domination in FIFA 13 Ultimate Team, without having to stand in line. 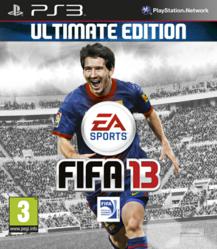 On September 28th, fans of the best-selling sports franchise of all time – EA’s FIFA – will be able to get their hands on a copy of FIFA 13. However, FIFA13.com has recently announced their giveaway of 250 copies of FIFA 13 Ultimate Edition that can be obtained without having to leave the home. Highlighting features of FIFA 13 will be:

Included in the Ultimate Edition FIFA 13 game are the Gold Packs that will be received every week, for 24 weeks, to bolster a player’s FIFA 13 Ultimate Team. Also included are 10,000 EA Sports football club credits, which can be used to buy additional content within the game. Special content includes special celebrations, Virtual pro attribute boosts, extra matches in Head-to-head Seasons mode, and more from the EA Sports football club catalogue.

You can read more about the competition at: http://www.fifa13.com/news/250-copies-of-the-upcoming-fifa-13-ultimate-edition-game-to-be-won/1739/