New Thesis on African Slavery Takes on a Different Approach

Dr. R. A. Milwood makes a bold move as he takes on a refreshingly- sensitive approach in examining the impact of slavery on modern African life 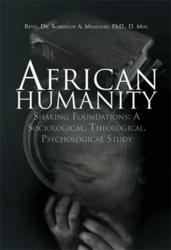 Technological and scientific developments that were withheld from Africa is the basic root cause of today’s underdevelopment in the country. The fundamental characteristics of African humanity and axiological values were viciously violated by Western Europeans and Britain through the flagitious immoral and horrendous transatlantic chattle slave trade. Dr. R. A. Milwood makes a bold move as he takes on a refreshingly- sensitive approach in examining the impact of slavery on modern African life in African Humanity.

This insightful work of Milwood is provocative and well-written. African Humanity is a groundbreaking thesis with an aim of inviting a dialogue, a serious debate about the sempiternal impacts on African personality and psychological effects of the transatlantic chattle slave trade in Africans. Milwood outlines a significant number of the different forms of brutalization, dehumanization, and sufferings the slaves suffered at the hands of the traders and slavers who claimed that they were Christians performing God’s duties.

For Milwood, most of the books written by white scholars on the transatlantic chattle slave trade in Africans have very serious academic shortcomings in terms of clarifications. Most bear the marks of literal reiterations and alliterations. In African Humanity, Milwood have consciously circumvented this pitfall by applying a new and innovative approach. He wrote, “My approach in this thesis is that of the hermeneutical approach. What is the logical point in twisting facts for beautification? The beautification of the history and character of a country and people based on mendacity.”

A valuable work of Milwood that urgently calls for political unification, African Humanity encourages African churches to radically embark on a rapid mobilization of the people for their liberation and educational enlightenment.

About the Author
Dr. Milwood is an ordained Methodist minister under the Methodist Conference of the Methodist Church UK. He is a Jamaican of Jamaican parents but for cultural and historical reasons Dr. Milwood through conscious connections with his past, described himself as an African descendant. Dr. Milwood was trained for the Methodist ministry at the Queen’s Ecumenical Foundation college in Birmingham UK. At the same time he was engaged in postgraduate studies in Philosophy of Religion and Theology at Birmingham University and he was personally supervised by Prof. John Hick and Dr. Liptner in Problems in the Philosophy of Religion. His major academic concentration was on Suffering and Evil in Judaism, Christianity, Hinduism and Buddhism.