Verbal communication using an iPad is now physically and financially accessible to people with complex disabilities. 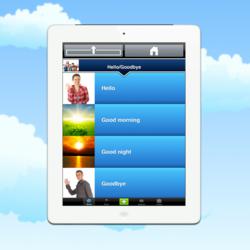 The TalkRocket Go app for kids and adults with speech disabilities.

As a parent of a child with special needs, I can tell you TalkRocket Go is going to make a huge difference for so many families, including mine.

MyVoice® Inc. today announced TalkRocket Go™, a wheelchair-friendly app for kids and adults with speech disabilities that is more physically accessible yet more affordable, at just $99. TalkRocket Go lets users connect buttons and switches, including those on wheelchairs, to an iPad, iPhone, or iPod, and then use those controls to speak words and phrases out loud.

“As a parent of a child with special needs, I can tell you TalkRocket Go is going to make a huge difference for so many families, including mine,” said Tony Gross, MyVoice’s Community Director. “There’s nothing else quite like it.”

TalkRocket Go uses voice synthesis technology to provide lifelike verbal communication for people with disabilities such as Autism, Cerebral Palsy, Stroke, Traumatic Brain Injury, Parkinson’s disease, and many others. TalkRocket Go’s predecessor is already used by ten thousand people in 30 countries, helping them participate in social life, access education, gain employment, and share the simple joy of speaking. For many, MyVoice products are life-changing aids that help them overcome adversity, discrimination, and exclusion.

One of those people is Tyler Austin, a young man with Cerebral Palsy who can now speak thanks to MyVoice technology. “I will go to camp this summer,” says Tyler. “I will be able to use my iPad to communicate with my mom and I will mount my iPad on my chair so I will be able to use it comfortably.”

For Tyler’s family, the change has been remarkable. “He would throw things on the ground, he would get upset because he could not communicate what he wanted to say,” his father, Eric Austin says. Now, Tyler’s mother Pamela sees him developing new independence and skills. “Things like money management and how to shop and pay for things and go to the bank,” says Austin. “He can go to the teller and we can stand back and he can call for what he wants.”

TalkRocket Go builds upon MyVoice’s groundbreaking technologies including “Locabularies” that use GPS to offer useful phrases based on a user’s location; Supporter Studio, an online tool that lets families, teachers, and therapists work together to customize users’ pictures and vocabulary; Swipe Storytelling, a flip-book-style feature that makes it easy to tell stories and practice life skills; and Full-Screen Scanning, which turns the whole touchscreen into one big button for better use by those with physical impairments.

“Watching users learn and grow with MyVoice since our first product in April 2011 has been simply incredible,” said Alex Levy, MyVoice’s CEO. “MyVoice was already more accessible than most communication aids, which can cost thousands of dollars, but we wanted to make TalkRocket Go even more effective and affordable.”

The new price is as big a breakthrough as the technology itself. At $99, TalkRocket Go is just half the cost of MyVoice’s previous $189 app, and up to 75% cheaper than many other apps with less functionality. This low price is a blessing for people with speech disabilities and their families, who are more likely to have limited incomes, and greater medical expenses.

“We’re on a mission to empower families across America and around the world by offering them the best tools for success,” said Aakash Sahney, MyVoice’s Chief Technology Officer. “TalkRocket Go is easy to use, family-friendly, and yet so life-changing.”

MyVoice chose the 15th Biennial Conference of the International Society for Augmentative and Alternative Communication (ISAAC) in Pittsburgh for the launch of the new app. The theme of "Highest performance communication; best life experience - WOW!" focuses on ISAAC's mission that people anywhere in the world who communicate with little or no speech deserve to achieve the most effective communication possible in order to achieve their maximum potential.

TalkRocket Go is the second major product from the multi-award-winning assistive technology company.

TalkRocket Go is available starting in August for iPad, iPhone, and iPod Touch in the App Store for $99 to new users, or as a free update for existing MyVoice customers.

MyVoice Inc. is a leader of the ongoing renaissance in assistive technology that is using consumer devices like iPad to provide support to millions of people with disabilities. Before MyVoice and its peers, communication aids like those used by physicist Stephen Hawking cost as much as $20,000 and were difficult to operate, putting them out of reach of most people in need. MyVoice’s innovative apps are pioneering amazing new features while also being the most affordable products in their category.

MyVoice’s products have won the Autism App of Distinction award, were featured by Apple as a recommended special education app, and have been the #1 medical app in the United States and Canada. MyVoice’s creators were named the University of Toronto’s Inventors of the Year and PROFIT Magazine’s Entrepreneur of the Year.