Tickets Go On Sale This Friday August 3 At 10AM! 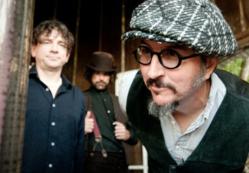 Primus have announced their 3D tour, the first-ever traveling 3D-enhanced live musical performance. This groundbreaking show will make a stop at the Taft Theatre on October 30.

Primus is excited to announce a unique 3D tour this fall, featuring two sets per evening. Being that this is the firstever traveling 3D-enhanced live musical performance, thisgroundbreaking tour is sure to provide a one-of-a-kind psychedelic experience, further enhanced by the fact that every show will also feature Quad Surround Sound.

Recently, Primus released the video for "Lee Van Cleef," premiered via TeamCoco.com. Primus also debuted the video for the single "Tragedy's a' Comin'", which premiered on IFC.com in a three-part series (part 1, part 2, part 3).

Primus' latest album, Green Naugahyde, was produced and engineered by Les Claypool in his personal studio, Rancho Relaxo, in Northern California, and features Claypool, longtime guitarist Larry LaLonde and drummer Jay Lane. Lane was in an early lineup of the band, and was also in Sausage, a 1994 reunion of the 1988 Primus lineup.

Green Naugahyde expands on Primus' incomparable sound and also sees them bringing it into the next millennium. It is a cerebral and complex album that, like all of the band's output, is teeming with the band's signature blend of whimsy and underlying darkness. For the past 27 years, Primus have followed in the footsteps of boundary-pushing artists like Frank Zappa and Pink Floyd to create some of the mosy original and inventive music in existence.

Green Naugahyde is a Primus record with all of the magic and mystery that phrase entails-and while no one can say for sure what the future will hold in store for the band, the most important thing is that the album exists and will inevitably hold its own in the band's impressive cannon of music.