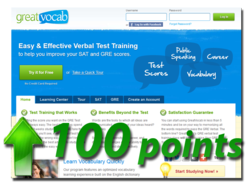 Before long, 500 people wanted to use it. So Cook turned it into a business – GreatVocab.com.

Faced with less than satisfactory results in his verbal scores on the GRE, Charles Cook did what a lot of other people do. He took a course. But unlike the traditional vocabulary courses, Cook created his own web-based, GRE training system.

And now that same system, GreatVocab.com can be accessed by anyone.

That was in 2008 when Cook, an undergraduate at the University of Florida, was interested in going to graduate school and study engineering.

“My verbal score was around 550,” he said. “That was not good enough. I wanted to improve, so I wrote a computer program in a few days using my engineering background. I trained myself and improved my vocabulary. I studied less than 30 minutes a day for about three weeks. When I took the GRE again, my verbal score was up 100 points.”

A friend saw the results and wanted to try it himself, than another friend and another. Before long, 500 people wanted to use it. So Cook turned it into a business – GreatVocab.com.

And it’s all done without one flash card.

The program is not just for those prepping for the GRE. Since its launch, hundreds of students, writers, entrepreneurs and enthusiasts from around the world have also tossed out their flash cards and joined the GreatVocab.com community. The program has been expanded to include SAT and other standardized testing, along with the GRE. It will also accommodate anyone who wants to improve his or her vocabulary in order to communicate better and increase career potential.

To learn more about, go online to http://www.greatvocab.com. To arrange an interview with Charles Cook, contact Herb Jones at (352) 234-4372 or herb(at)online-potential(dot)com.