Violent Sex in the Redwoods Seen at Elk Meadow Cabins 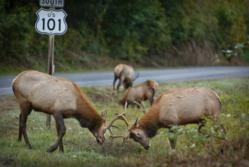 Elk rut beside U.S. 101 at the Elk Meadow Cabins in Redwood National Park

A big rack is what impresses the females, as when it comes to bull elks, size matters.

Each autumn, California’s most public display of violent sex occurs at Redwoods National and State Parks, near Orick, where testosterone-charged male Roosevelt Elk challenge each other for breeding rights to herds of female elk.

The often-bloody mating rituals are most easily seen near the Elk Meadow Cabins, six remodeled cabins within the elks’ mating area, that offer elk viewing packages in October. On lawns and meadows surrounding the cabins, from mid-September through October, male Roosevelt Elk are seen posturing and rising dramatically to lock antlers as they push one another back and forth to exhaustion in order to assert their dominance.

Roosevelt Elk (cervus elaphus candadensis) are the largest specie of elk in North America, averaging 875 pounds (398 kg) and standing 5 feet (1.5 m) tall at their shoulder. Their antlers are thick with vertical points and a distinctive crown or three-point tip. Some antler racks have been measured as big as six feet (1.8 m) and weighing 40 pounds (18 kg). A big rack is what impresses the females, as when it comes to bull elks, size matters.

While male Roosevelt Elk put on a terrifying display, their fury is focused entirely on each other. They are otherwise inquisitive but standoffish to people, which adds to their appeal to wildlife viewers. Rutting behaviors can be watched easily, without disturbing the elk, though viewers are cautioned not to approach the elk.

Elk herds consist of females and their offspring, in groups of 20-30 individuals. During rutting season the cows feed quietly, seemingly uninterested in the bulls until one wins out. He will then herd and mate with the cows while keeping other bulls from the harem.

The rut occurs randomly at any time of day or night, sometimes resulting in guests of the cabins being awaken in the middle of the night as two bulls fight one another. Otherwise, the elk spend much of their day seeking, eating, and digesting food with main feeding times at dawn and dusk.

At Elk Meadow, guests can choose from two October packages. On the “Elk Rut Package,” guests who stay any two nights at the normal rate of $219 per night (each cabin sleeps six), can stay for additional nights at half off, and up to four guests per cabin get a free, naturalist-guided elk tour provided by Redwood Adventure Tours, a local ecotour provider.

Guests who stay any three nights (Monday - Friday) in an Elk Meadow Cabin ($219) during October and who request the “Indian Salmon Package” when making their reservations, get up to four Indian-styled, barbecue salmon dinners with their cabin rental (served Wednesday evenings only). The dinners include fresh salmon barbecued on redwood stakes set around a fire made of local madrone and alder, in the traditional style of northwest California’s native Americans. The salmon is served with fresh salad, fruit, beverages (lemonade, water, coffee) and a cobbler usually prepared from local berries.

The “Elk Rut” and “Indian Salmon” packages can only be obtained in advance by calling (866) 733-9637. Guests must pick one or the other offer, as the packages cannot be combined. More information about the Elk Meadow Cabins is found online at http://www.redwoodadventures.com.

Roosevelt Elk cows are so numerous, they have right of way at Elk Meadow Cabins