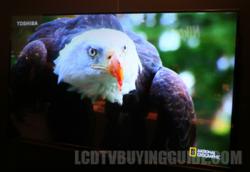 For an LED-LCD TV the L5200U's offer some serious value

LCD TV Buying Guide Editors Jack Burden and Robert Wiley thoroughly review the features and many of the qualities in new 2012 Toshiba LED TV Reviews of models that entered the HDTV market this year. The editors have published features reviews for new series such as the L5200U and L6200U series for 2012. “These TVs will be extremely popular this year due to their relatively good black levels and price to value.” stated editor Robert Wiley. “The L5200U series probably offers some of the best value in the market if you just want a good LED backlit picture.”

Editors note many improvements in the second to top of the line Toshiba 47L6200U for which the athors note: “Priced at $1400 or so there is lots of competition in the 46 and 47 inch size LCD TVs. This Toshiba is feature loaded and compares with the Sony KDL-46HX750, the LG 47LM6700, and the Samsung UN46ES7100 series. As such I would give it a satisfactory value rating as it comes in at a comparable price to those TVs. Of course, the passive 3D glasses do make the Toshiba a bit more competitive than the Samsung or Sony.”

Editors also reviewed models from the next series down with this comment about the super-value oriented Toshiba 50L5200U, “The 50 inch LED/LCD offering size has never been done before this year with this model. It's obviously there to offer competition to plasma TV 50” size offerings. It is a good choice even at $999 for brightly lit rooms especially ones that have light from windows if you plan on doing a lot of daytime television viewing. There are hardly any other 50 inch LCD/LED TVs to compare to as other manufacturers make 47” and 55 inch TVs not daring to compete with the 50” plasma TVs on the market. A good comp in plasma would be the Panasonic TC-P50UT50 which sells for $899 and has a better, though dimmer picture as well as 3D, and Smart TV function. Still, I give this TV over a 9 in value due to the sheer lack of competition in LED TVs in this size and because the picture gives you the positive attributes of LED if that's what you need.” And similar comments about the Toshiba 46L5200U , “At $799 this is a great value model in the 46/47” sizes range. With pretty decent black levels and a bright very saturated picture and 120Hz this is a good value TV. Sony's KDL-46EX640 has a comparable feature set and picture quality and sells for $200 more. I like the picture quality more on this Toshiba than the comparable Samsung UN46EH6000 model which is $100 more. So this model is very good in the value department for a 46” LED/LCD. There is almost no plasma TV models in this size to compete.”