Golfer makes $10,000 hole in one at tournament and Hole In One International pays for the prize. 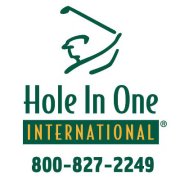 “Hole in one insurance is a savvy tournament director’s secret weapon,” notes Gilmartin.

According to Mark Gilmartin, President and CEO of Hole In One International, “With hole in one insurance, for a small fee, a golf tournament director can offer a headline-grabbing prize - like a dream golf vacation to Pebble Beach, a trip to the U.S. Open, a brand new car or even a $1,000,000 - and if a golfer aces, Hole In One International will be there to pay for the prize.”

Prices for hole in one coverage start from just $150 and are based on the total cash value of the prize being offered, the number of participants in the tournament and the length of the hole that’s being insured.

Hole In One International includes complimentary auxiliary prizes for all non-target par threes, complimentary tee markers, customized target hole contest signs and, as a thank you gift, customers also receive a package of free golf club coupons, courtesy of FreeTeePrize.com, which can be used as a complimentary tee prize.

“Hole in one insurance is a savvy tournament director’s secret weapon for driving increased golfer turnout, capturing additional sponsor dollars, and generating bigger press coverage for both the event and the charity,” notes Gilmartin, whose company also offers coverage for million-dollar golf shoot-outs and putting contests.