Track The Scammers Not The Scam, says Verify1st

The ease with which internet scammers can repeat and expand their scams means it's no longer enough to just identify isolated scams. Verify1st.com provides a powerful online tool to protect consumers against new scams. 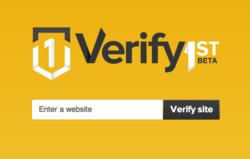 Who can you trust? Find out with the click of a button.

Verify1st has fingerprinted millions of websites, tracking their identity, reputation and connections.

Online shoppers have been urged to go beyond the established practice of checking websites against known scams if they want to properly protect themselves against online scammers.

Online shoppers have a new high-tech tool to fight against online scams.

Katrina McKinnon, co-founder of the recently launched Verify1st.com, warns that the ease with which internet scammers can repeat and expand their schemes means it's no longer enough to just identify isolated scams.

A better course of action, she says, is to track those responsible and identify sites associated with them. Basically, if site A is identified as a scam, and site B has connections to it, then consumers can determine if site B is a scam too.

"Scrutinizing sites and their reputation is fine, but stopping there is like the police chasing crimes rather than criminals," she says. "Internet shoppers obviously want to avoid a scam but unless the perpetrator is tracked, there is no way of knowing until it's too late.

"A better way to achieve full protection is to track the scammers not the scams. We know that scammers don't operate one scheme, but often repeat them through other websites. But these sites can be linked, and this means that consumers can be forewarned when associations between sites are highlighted."

It is no secret that Internet crime is a growing problem. The latest report from the Internet Crime Complaint Center (IC3) in the US revealed that more than 314,000 complaints had been made by American Internet users over the course of 2011 - an increase of 3.4% on the number recorded in 2010 - with more than $485 million lost (1).

In the UK, meanwhile, figures published in 2010 revealed that online fraud costs UK internet users (corporate and private) around Stg3.5bn per year, and that 11% of Internet users fell victim to scams over the course of 2009 (2).

Consumer websites, like the Better Business Bureau (bbb.com) and Web of Trust (mywot.com) have sprung up to warn online shoppers, but they rely on evaluations from victims and media reports to produce their ratings.

"The anti-scam industry is geared more towards recording and cataloguing scams than providing the sort of detailed information necessary for consumers to pro-actively assess a threat for themselves. The result is that online shoppers are still vulnerable," McKinnon points out.

The inadequacies of the current method has been highlighted many times. Firstly, with such a reliance on user experience, there is always going to be an issue with accuracy. Mywot.com, for example, asks users to rate sites themselves, leaving perfectly legitimate websites vulnerable to unjustified criticism.

Secondly, these scam detection services can only react to scams. What this means is that thousands of users must fall victim before a site can be red flagged. Scammers need only register a new domain to continue their scheme so, in truth, the online community remains at risk.

Thirdly, online shoppers are required to do a lot of research themselves before they can feel fully confident in buying from a particular online store. The time drain involves typing in keyword varieties and cross-referencing domain names. And, after all this effort, everything still rests on someone else having already reported a scam.

However, Verify1st provides a new approach to the issue by shifting the focus to identifying the scammers, not their activities. In this way, consumers are equipped to spot likely threats straight away.

"Consumers are not being given the information to make decision for themselves, but it doesn’t have to be that way," McKinnon says.

"Verify1st focuses its attention on tracking the scammers, not the scams," she explains. "We have fingerprinted millions of websites and have built a relational web between them.

“With this tool, when a scammer opens a new website, we are able to connect it to their old scam site. So, online shoppers can spot the association and steer clear of the threat."

Verify1st.com is a newly-launched online tool that helps consumers check the trustworthiness and reputation of a business, before they buy online.

Created in 2012, it’s an essential tool for anyone wishing to shop online safely, for anything ranging from clothes, electronics, weight loss products, sporting goods and everything inbetween.

Verify1st provides a full, transparent and easy-to-understand report on any chosen website’s reputation, identity and relationships, arming consumers with vital information needed to safely decide whether to continue or stop buying from the site.