What’s happening that will change the world for better or worse? What do we need to know now to build a better future? The Millennium Project and its annual "State of the Future" reports are providing a way for the world to think together about the future. 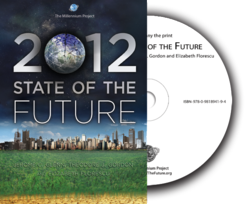 The world is improving better than most pessimists know, but future dangers are worse than most optimists indicate.

The "2012 State of the Future" report states that, “The world is improving better than most pessimists know, but future dangers are worse than most optimists indicate.” After 16 years of global futures research, we have “found more agreement about how to build a better future than is evident in the media”, according to Jerome C. Glenn, CEO of The Millennium Project and co-author of the "2012 State of the Future." “When you consider the many wrong decisions and good decisions not taken—day after day and year after year around the world—it is amazing that we are still making as much progress as we are.”

This year’s report verifies that the world is getting richer, healthier, better educated, more peaceful, and better connected, and that people are living longer; yet, half the world is potentially unstable. Protesters around the world show a growing unwillingness to tolerate unethical decisionmaking by power elites. An increasingly educated and Internet-connected generation is rising up against the abuse of power. Food prices are rising, water tables are falling, corruption and organized crime are increasing, environmental viability for our life support is diminishing, debt and economic insecurity are increasing, climate change continues, and the gap between the rich and poor continues to widen dangerously. However, the most recent data from the World Bank shows that the share of world population living in extreme poverty has fallen from 52% in 1981 to about 20% in 2010.

The world is in a race between implementing ever-increasing ways to improve the human condition and the seemingly ever-increasing complexity and scale of global problems. So, how are we doing in this race? What’s the score so far?

There is no question that the world can be far better than it is, IF we make the right decisions. The "State of the Future" sets a context and framework for better decisions.

"A must read for any decisionmaker." -- Enrique Peña Nieto, President of Mexico

"A must read for urban development decisions of today." -- Zoran Janković, Mayor of Ljubljana, Slovenia

The "2012 State of the Future" is an overview of our global situation, problems, solutions, and prospects for the future. "15 Global Challenges" including energy, food, science and technology, ethics, development, water, organized crime, health, decisionmaking, gender relations, demographics, and war and peace are analyzed, studied, and recommendations are made. The briefing is especially critical for senior executives, thought leaders, strategic planners, public policy experts, policy advisors, non-profit organization leaders, teachers/professors of world issues, and anyone interested in a global overview of our prospects for the future.

The 16th Annual Edition comes as an Executive Edition of 145 pages plus a 10,000 page electronic supplement with more than 1,500 additional pages of detailed current material, and searchable research from the past 16 years. It is a distillation of research with tables, graphs, and charts with special chapters on 15 Global Challenges, the State of the Future Index, changing stereotypes about women around the world over the past 50 years and projected next 50 years, future factors affecting cooperatives and businesses, hopes and fears of Kuwait, and futures of ontologists. The rest of the report is approximately 10,000 pages detailing the global situation with a range of strategies, analyses, and regional considerations for 15 Global Challenges facing humanity; eleven years of research and analysis for developing a State of the Future Index; several global and regional scenarios; governance-related studies; concepts for building collective intelligence systems; environmental security studies; over 850 annotated scenarios; and various approaches for improving futures research, making it an extraordinary resource and data base for exploring the prospects for humanity.

“Everyone, and I mean EVERYONE, should read this incredible document, period!” -- Technological Forecasting & Social Change

Background: The Millennium Project was established in 1996 as the first global futures research think tank. It conducts independent futures research via its 46 Nodes around the world that connect global and local perspectives. Nodes are groups of individuals and institutions that pick the brains of their region and feed back the global results. It is supported by UN organizations, multinational corporations, universities, foundations, and the governments of Azerbaijan, Kuwait, South Korea, and the United States.

Interviews can also be arranged with Chairs of any of the 46 Nodes of The Millennium Project.