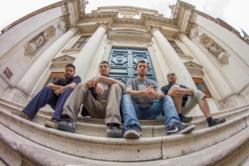 GREAT variations of sound. DO NOT SKIP THIS ONE. It’s so much more than just jazz.
- www.thesirensound.com

Serbian band EYOT takes the stage in Nis, Serbia at the Nisville International Jazz Festival- one of the biggest festivals in Europe - alongside jazz greats such as the Jean Luc Ponty Band, the Jon Cowherd Mercy Project, featuring John Patitucci, Brian Blade and Steve Cardenas, the Brussels Jazz Orchestra, featuring Maria Joao and David Linx, and many more. Dejan Ilijic, the pianist and band leader of fusion quartet EYOT will share the stage Sunday night with the Brand New Heavies, Get the Blessing and other renowned international artists. EYOT is taking the music world by storm, mixing their jazz talent with traditional rhythms and inner-city club intensity. They continue after Nisville with an Asian tour.

EYOT's new DVD is available for pre-orders from the band's website, and will be distributed in the United States by Ninety and Nine Records in New York City. The entire video is available for streaming on YouTube.

Within the chiaroscuro between east and west, good and evil, members of the band EYOT spin a web of hushed tones and howls with their new brand of eastern jazz. This is the music of ancient civilizations, of traditional moonshine, of dervishes and religious festivals. It is the music of blood running through the streets and of hatred. It is the music of love, reconciliation, friendship and peace. It is the marriage of east and west, and the meeting of ancient and modern. The twisted steel of the musical arrangements in EYOT's first record have earned them ebullient praise from critics, and their live shows cannot be missed. The intensity is palpable.