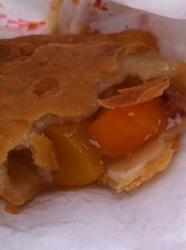 The Original Fried Pie Shop has officially announced the Nation’s first ever sanctioned National Peach Fried Pie Eating Championship to be held on September 29th in their newest location in downtown Dallas at Baker’s Ribs. Baker’s Ribs, who will be hosting the event in the newly renovated Deep Ellum location has partnered with The Original Fried Pie Shop and put in a full-scale pie shop within the infamous barbecue restaurant. Joe Duncan, Owner, said “Our customers always like to tell us how many pies they have eaten so we thought what a great way to put their mouths to the test and have a Fried Pie Eating Championship. We are all excited about this upcoming tasty battle!”

All Pro Eating Promotions, the World’s most recognized Independent Competitive Eating Organization, will be the official Competitive Eating Sanctioning Body of the event and will handle all contest related activities including registration. The Original Fried Pie Shop National Peach Fried Pie Eating Championship will feature some of the top Competitive Eaters in the nation as the participants battle for $3000.00 in prize money with a 1st Place prize of $1500.00. In addition, a new All Pro Eating National Peach Fried Pie Eating Record will be established at the event.

The Original Fried Pie Shop began in 1893 when Nancy Fulton’s grandmother would feed hand pies to the ranchers in the fields of Oklahoma's Arbuckle Mountains. Since opening their first store in Davis, Oklahoma, the pie shop has expanded to Texas, Arkansas and Missouri with 14 other franchise locations serving fried pies with “Southern flair and hospitality”. Fried pies are quickly finding themselves to be smash hit all over the country, selling over 5,500 pies in a 2 day period at the Big Apple BBQ block party in New York City and now plan on being a fried food staple at the great State Fair of Texas this September and October.

An Original Fried Pie Shop fried pie is served golden brown in a half-moon shape, so you can hold in a single hand and eat while piping hot. They are made with intensely flavored fillings both sweet and savory folded into fried pie buttermilk crust and deep-fried in 100-percent peanut oil. Using a more than 100-year-old fried pie recipe that is straight from Grandma’s kitchen, The Original Fried Pie Shop fried pies are made fresh throughout the day with ingredients straight from their Arbuckle Mountain facility. As Nancy says, “We pride ourselves on making the same tender flaky and big as ever homemade pies that my Grandma made.” Fried pies are known as a perfect food solution for breakfast, lunch, dinner or “anytime else” food. Customers can fill up on a quiche like breakfast pie, launch into full scale gluttony with one that reminds them of a chicken pot pie, calzone pizza or treat themselves to a fruit or cream pie any time of the day. No matter the time or the craving, a fried pie will always make mouths happy.

All Pro Eating already has confirmation from several of the World’s top Independent Competitive Eaters including Eric “Silo” Dahl, Stephanie “Xanadu” Torres and Jamie “Bear” McDonald in addition to local Competitive Eaters for their involvement with The Original Fried Pie Shop National Peach Fried Pie Eating Championship. Registration will remain open until all available spaces have been filled and anyone wishing to register or participate can find additional information on the All Pro Eating Promotions website or by contacting Todd Greenwald via email HungryGenius(at)CompetitiveEaters(dot)com

About THE ORIGINAL FRIED PIE SHOP: Since 1893, The Original Fried Pie Shop has focused on providing delicious handmade delicacies to every customer. Each pie is made with pride and a high level of quality and service that every customer deserves. More information can be found on line at http://www.theoriginalfriedpieshop.com/index.html