This past weekend (August 25-26) wrapped up the 4th annual San Diego Spirits Festival – the festival truly delivered on its promise to be the ultimate celebration of cocktails, culinary and local culture in Southern California! Founded by Festival Director Liz Edwards in 2009, the 2012 San Diego Spirits Festival was an incredible success. The 2-day event at the Port Pavilion on Broadway Pier saw over 2,500 visitors inside the Pavilion and 2,000 in the forecourt– this was the most successful and well-attended Festival to date. With so much excitement and buzz surrounding the extremely successful event – the Festival will no doubt be even bigger and better in 2013. Plans are already underway for the 5th Annual San Diego Spirits Festival – August 24-25 2013. 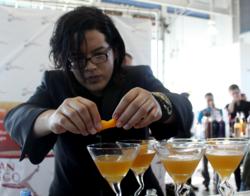 The 2012 The San Diego Spirits Festival August 25 -26 was the perfect blend of high end domestic and international spirits, top mixologists and master chefs all in one perfect location.

Platinum Sponsor: The Unified Port of San Diego and the San Diego Tourism & Marketing Board

Ron Jeremy caused quite the scene when he made his guest appearance on Saturday.

Over the two days the participants used 6,000 lbs. of ice and over 600 lbs. of recyclables were recovered by The 1 to 1 Movement.

Thank you to the Unified Port of San Diego

Explore your world with Ozone Vodka