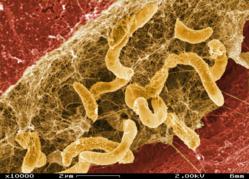 Chronic wounds are the window into all other biofilm diseases... eight to ten million people have chronic wounds at any given time.

What do hospital infections, sinusitis, periodontal disease, middle ear infections, tonsillitis, COPD, diabetic foot wounds, osteomyelitis and cystic fibrosis have in common? The persistence of these chronic conditions originate from slimy bacterial biofilms that encase bacteria and microbes of many types, exploit the immune system and resist antibiotic treatment.

While the existence of bacterial biofilm was first documented in 1683 and rediscovered in the late 1970s, molecular diagnostics have demonstrated the omnipresence of biofilms in medical conditions affecting more than 17,000,000 people annually. The film Why Am I Still Sick? identifies the multifaceted roles of biofilms in causing persistent disease and offers startling revelations through interviews with medical experts and patients:

While the film produced by The Arthroplasty Patient Foundation paints a grim picture of the diagnostics infrastructure within the American medical system, it presents a number of available solutions for patients suffering with biofilm infections, especially in the dental, wound and ENT areas.

“Patients who have chronic recurrent sinusitis that have failed medical and surgical treatment are known to have the sinusitis caused by biofilms, which makes them resistant to standard treatment, stated Merrill Biel, M.D., Ph.D. of otolaryngology at Ear, Nose & Throat SpecialtyCare of Minnesota. “In the past ten years we have made considerable progress in our laboratory successfully treating chronic sinusitis biofilm and we are presently bringing that new and exciting therapy to clinical practice.”

The foundation’s companion site biofilmcommunity.org hosts high definition video interviews with biofilm researchers and physicians. Wound treatment expert Dr. Randy Wolcott explains how “chronic wounds are the window into all other biofilm diseases” and that “eight to ten million people have chronic wounds at any given time.” Other interviewees in the film draw connections between wounds and dental diseases.

“Cavities and gum disease are both biofilm-related conditions that can be controlled or eliminated with the proper understanding of how oral bacteria affect overall health. We design dental benefit plans to take advantage of the most current knowledge on prevention, a program that we call “Preventistry,” stated Doyle Williams, D.D.S. and Chief Dental Officer at DentaQuest in Boston.

The film is dedicated to the late Dr. “Bill” Costerton, known as the “father of biofilms,” who rediscovered biofilms in the late 1970s and established the study of biofilm communities as a life science. His pioneering research spawned hundreds of patents and new product innovations in biomedical, waste treatment, energy and yet undiscovered applications. As a microbiologist, avid hiker and naturalist, he defined the archetype of bacterial communities in their normative “sessile” states, cooperating with other species, including yeasts and fungi. In the 1990s, Dr. Costerton’s work clearly illustrated the causal role of chronic biofilm infections in human diseases.

The film can be ordered from the film’s site (whyamistillsick.com) and will be shown throughout the United States in 2013 by the non-profit foundation. The initial release will offer closed-captioning and English sub-titles. The final release in December will offer Chinese, Spanish and French sub-titles.

Supporting its corporate mission, the foundation is exploring grant and sponsorship opportunities to educate patients and clinicians about biofilm diseases. Content licensing agreements and other methods to share the biofilm video library are in development.