A new study indicates travel among Affluent African Americans has increased by 30 percent in the past three years, with 60 percent of the target group taking at least five overnight business. 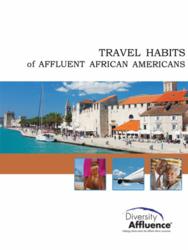 Affluent African Americans Travel Frequently. They are the New Jet Set. A target market for any travel and tourism entity to be engaging.

Diversity Affluence, a diversity research, marketing communications and business development consultancy that uniquely helps brands and businesses understand and market to affluent ethnic consumers, has released a new research report indicating travel among Affluent African Americans has increased by 30 percent in the past three years. The study also shows approximately 60 percent of the target group takes at least five overnight business trips and two-thirds of those traveling spend a minimum of $2,000. The findings come at a time when the overall travel and tourism industry is experiencing downturns due to the current economy.

"The significance of the findings is not just in the surprising fact of an increase in travel among the Affluent African American market, but also how these trends impact industries outside of traditional travel and tourism," says Andrea Hoffman, founder and CEO of Diversity Affluence. "Restaurants, advertising companies, insurance companies, chambers of commerce, and arts organizations are only a few of the ancillary industries that also benefit from the increased travel among Affluent African Americans."

The study has identified a new segment of jet setters, according to Hoffman, noting the information is important to anyone seeking to understand travel patterns and needs in order to reach new customer markets.

Key findings in the study include:

Affluent African Americans Travel Frequently. Almost all Affluent African Americans respondents took multiple overnight vacations in 2011 and over half took at least five overnight trips. Despite challenging economic conditions, this group is traveling more than ever with almost half of all respondents increasing their travel over the past three years.

Effective Marketing to Affluent African Americans Requires Understanding. This important market is a knowledge, luxury, and value-driven group and thus understanding their motives and the most effective ways to reach them is paramount. Diversity Affluence's focus is just this; helping organizations utilize their marketing resources to effectively reach this substantial and often overlooked market.

"The Affluent African American market travels frequently, often with others, leading to large revenue for businesses," Hoffman says. "the importance of understanding this group and targeting communications to them becomes clear. This important market is a knowledge, luxury, and value-driven group and thus understanding their motives and the most effective ways to reach them is paramount."

As the only company of its kind, Diversity Affluence is a New York-based diversity research, marketing communications and business development consultancy that helps brands and businesses understand and market to affluent ethnic consumers-a group coined as "Royaltons™." For more than 25 years, Andrea Hoffman, Diversity Affluence's founder and chief executive officer, has been a marketing strategist and trend forecaster.