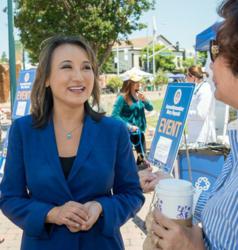 This is a momentous occasion for mental health, symbolizing a renewed commitment toward the prevention of suicide.

Today, Assemblywoman Mary Hayashi (D-Hayward) announced the release of the revised National Strategy for Suicide Prevention. Assemblywoman Hayashi is a member of the Executive Committee of the National Action Alliance for Suicide Prevention, which took on the task of reviewing and refining the groundbreaking document that was first presented by then-U.S. Surgeon General Dr. David Satcher in 2001.

“This is a momentous occasion for mental health, symbolizing a renewed commitment toward the prevention of suicide,” stated Assemblywoman Mary Hayashi. “The revised strategy benefits from an array of stakeholder input and a decade of new research and experience, creating a strong and focused action plan for all those concerned about this public health crisis.”

The Alliance is a public-private partnership that helps guide the implementation of the goals and objectives of the National Strategy for Suicide Prevention (NSSP). The NSSP represented the first framework and blueprint for action on suicide prevention in the United States. Published by the U.S. Department of Health and Human Services in May 2001, the NSSP has guided the nation’s suicide prevention efforts for a decade. The Alliance envisions a nation free from the tragic experience of suicide, and champions prevention as a national priority.

Assemblywoman Mary Hayashi has been a member of the Alliance since its inception in 2010. A dedicated mental health advocate, Assemblywoman Hayashi catalyzed the creation of California’s first Statewide Office of Suicide Prevention and serves on California’s Mental Health Oversight and Accountability Commission, which oversees the implementation of Prop.63.

Assemblywoman Mary Hayashi serves the 18th Assembly District, which includes San Leandro, Hayward, Dublin, most of Castro Valley and Pleasanton, and a portion of Oakland, as well as the unincorporated areas of Ashland, Cherryland, San Lorenzo and Sunol.