Retro™ has released the first of 3 cycling jerseys for men and women after entering a 3 year license agreement with CBS. A premier recreational cycling apparel company, Retro™ is excited to announce the release of its cycle jersey featuring iconic art from the original 1960’s television series archives. The officially licensed cycle jerseys were approved by CBS on June 1, 2012. 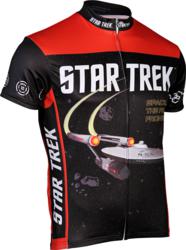 The Star Trek jerseys are available now in retail outlets nationwide and online at http://www.retroimageapparel.com

Retro’s™ is a leader in enhancing the visibility of iconic images by pushing influential artwork into the cycling soft goods apparel niche. Their mission is to look to the past in a variety of commercial graphic design genres, and create cycling apparel. As a brand, Retro™ ushers recreational cyclist to places from their own time line when life was innocent; where the imagination was captured visually by icons that remain in the consciousness of pop culture.    The spirit of Retro™ stands as a tribute to the genius behind each artist's work.

Retro/MBJ LLC is a leader in enhancing the visibility of iconic images by pushing influential artwork into new mediums. The Retro brand ushers consumers back to places in their past when universal iconic figures, products and graphics captured their hearts and imagination, a time when they were full of innocence and life seemed care free. The Micro Beer Jerseys line celebrates brand art from the handcraft beer industry. The collection tag line simply states, “Celebrating the Art of Handcraft Beer.” The spirit of Retro/MBJ LLC stands as a tribute to the genius behind each artist's work. Retro/MBJ LLC is at the epicenter of the bustling Portland, OR cycling scene, and reaches an international community of enthusiastic cyclists through its online sales network and dealer direct wholesale distribution in the United States, Japan, Australia, New Zealand, South Korea and now, 26 European Union Countries.