Zion Rootswear’s line of Martin Luther King, Jr. clothing will be a significant addition to the retailer’s long history of officially licensed merchandise. 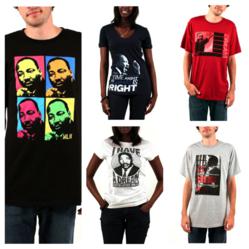 Shirts available in mens, womens, juniors and plus sizes, starting at $19.

Our goal was to develop t-shirts that celebrate Dr. King's life and legacy through artistic, fashion-forward designs that promote his teachings.

Zion Rootswear has partnered with GreenLight and The Estate of Martin Luther King, Jr. Inc. to carry on Dr. King’s legacy and create officially licensed apparel.

“We are pleased to have signed Zion Rootswear as an apparel partner. Their dedication to Dr. King’s legacy is obvious in their designs and we are looking forward to a successful partnership,” said Stephen Rubino, CEO and President of The Martin Luther King, Jr. Estate.

“The world has embraced Dr. King's legacy as a gifted activist, orator and positive figure who stood for peace, nonviolence and equality, and we are honored that the Martin Luther King, Jr. Estate chose Zion Rootswear to create and license Dr. King apparel,” said Brian Conley, president of Zion Rootswear. “Our goal was to develop t-shirts that celebrate Dr. King’s life and legacy through artistic, fashion-forward designs that promote his teachings.”

Zion Rootswear will launch with fashionable t-shirts for men and women, but consumers can expect more merchandise to be released in the near future. The first wave of t-shirts will vary in style and cut, ranging from V-necks, to crew necks, screen printed tees to pop art influenced designs and many more.

The shirts will be distributed exclusively by Zion Rootswear, and available at http://www.zionrootswear.com as well as certain retailers nationwide. The price point for the Martin Luther King, Jr. line begins at $18.99.

ABOUT ZION ROOTSWEAR
Zion Rootswear is a proven leader in the entertainment merchandising industry. Being a key distributor of officially licensed clothing from the estates of Bob Marley, Johnny Cash, Jimi Hendrix, Elvis Presley, Grateful Dead, Jerry Garcia and more, Zion Rootswear has made its mark in the ultra competitive merchandising industry. Zion Rootswear specializes in tees, hoodies, fashion tops and accessories. Since 1999, Zion Rootswear has contributed over three million dollars to charitable causes and continues to support the chosen charities of its iconic properties. http://www.twitter.com/zion_rootswear

ABOUT DR. MARTIN LUTHER KING, JR
Martin Luther King, Jr. (January 15, 1929 – April 4, 1968) was an American clergyman, activist, and prominent leader in the American civil rights movement. He is best known for his role in the advancement of civil rights in the United States and around the world, using nonviolent methods following the teachings of Mohandas Karamchand Gandhi. He led the 1955 Montgomery Bus Boycott and helped found the Southern Christian Leadership Conference (SCLC) in 1957, serving as its first president. King's efforts led to the 1963 March on Washington, where King delivered his "I Have a Dream" speech. There, he established his reputation as one of the greatest orators in American history. In 1964, King became the youngest person to receive the Nobel Peace Prize for his work to end racial segregation and racial discrimination through civil disobedience and other nonviolent means. By the time of his death in 1968, he had refocused his efforts on ending poverty and stopping the Vietnam War. King was assassinated on April 4, 1968, in Memphis, Tennessee. He was posthumously awarded the Presidential Medal of Freedom in 1977 and Congressional Gold Medal in 2004. Martin Luther King, Jr. Day was established as a U.S. federal holiday in 1986.