The music of Django Reinhardt and the style of gypsy jazz has reincarnated today into the digital age online, thanks to the new iPad only magazine Gypsy Jazz Guitar Secrets, available via iTunes and created by world-renowned guitarist and music educator, Robin Nolan. 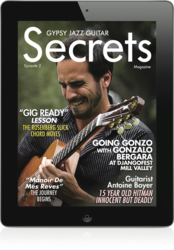 Gypsy Jazz Guitar Secrets delivers entertainment and results to our readers around the world, whether they’re at home or on the move.

Launched July 2012, the digital, multimedia iPad magazine is unique in that each issue combines artist interviews, musical performances and playing tips with specific training - videos, backing tracks and music charts - for honing readers’ gypsy jazz guitar skills. All the articles contain video content with live concerts, interviews, and lessons from the best guitarists in the genre.

“Gypsy Jazz Guitar Secrets is the only magazine dedicated to this fantastic music. With easy to follow videos, plus interviews with top gypsy jazz players, it’s a must for anyone who wants to enjoy the best of gypsy jazz and improve their guitar skills at the same time. Download it today you won't regret it,” said subscriber Janet Van Goudswaard – The Netherlands

Gypsy Jazz Guitar Secrets magazine fulfills an important need for the global gypsy jazz community, keeping readers up to date with news and events from the live scene, and giving guitarists an opportunity to study and improve their skills in a way not possible before. Readers can take the magazine with them wherever they have their iPad and an internet connection.

“I’m totally stoked to be able to provide quality content in this dynamic and interactive way. Gypsy Jazz Guitar Secrets delivers entertainment and results to our readers around the world, whether they’re at home or on the move,” said Robin Nolan.

Robin Nolan, one of the world’s best-known and most admired gypsy jazz guitarists, has been lauded for his musical genius and sensibilities by Willie Nelson, Rolling Stones bassist Bill Wyman, and the late George Harrison.

While his inspiration lies in Gypsy Jazz, Latin and Hot Club de France, Robin has a decidedly contemporary feel and fires up his music with his own expressive "je ne sais quoi". Backed by his trio’s hypnotic rhythms, his rippling melodic ideas and solos set him apart from his contemporaries. Whether playing jazz standards, original compositions, or a nod at rock and pop musicians, Robin always delights his audiences with a show of special splendor and style.

In addition to his busy schedule as a performer, Robin is also known as a passionate instructor. He’s released some of the most important gypsy jazz instructional books, CDs and videos in the past ten years. His play-along CDs and Gig Book have been the foundation of study and jam sessions for thousands of guitarist worldwide. His current online instructional courses include his Gypsy Jazz JumpStart Masterclass, Gypsy Jazz Fast Track, Gypsy Jazz Transfusion, and the new Gypsy Jazz Guitar Secrets iPad magazine. Robin’s entire gypsy jazz instruction catalogue can be found at http://www.RobinNolanTeaches.com.