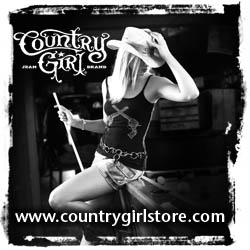 “This is the first time that a clothing and lifestyle brand has created their own single directly for its fans. “Proud to be a Country Girl” will be Country Girl Nations’ theme song.

In an unprecedented and savvy marketing play, Country Girl / Country Boy brand will officially premiere their new signature song directly to fans on social media. With over 370,000 fans and counting on FaceBook, an eager following awaits the release of what is sure to be a nationwide smash hit in the music industry.

At 9:00 p.m. on Tuesday, September 18 access to the purchase of “Proud to Be a Country Girl” will be released on the Country Girl FaceBook page located at http://www.facebook.com/countrygirl . The song performed by Union Rose with talented singer Marti Dodson on vocals tested off the charts with a focus group of fans which is no surprise given Marti’s achievement as a BMI award winning singer and songwriter.

Union Rose, a three piece country act from Columbus, Ohio, describe their music as “gritty pretty”. The new song for Country Girl is immediately identifiable as a theme song for can-do independent country girls. Rolling out the song for purchase on Amazon.com and iTunes is expected to boost the FaceBook following for Country Girl to 1 million by November.
According to Larry Levine, President of Country Brand Clothing: “This is the first time that a clothing and lifestyle brand has created their own single directly for its fans. “Proud to be a Country Girl” will be Country Girl Nations’ theme song. It embodies all of what a Country Girl is and it is made especially for them.” The song will be available for purchase on iTunes and at http://www.Amazon.com.

Country Girl and Country Boy are successful and growing lines of clothing, accessories and gifts that are sold directly to the consumer at http://www.countrygirlstore.com and at selected retailers throughout the United States as well as retailers in Canada, Australia, Europe and now South America.

Can I get a Yee Haw