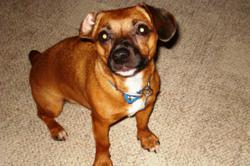 Last October, Keith and Christy Wolfram of Sicklerville, N.J., were given quite a scare when Peanut, their dachshund-terrier mix was found buried alive in the dirt beneath their deck following a scuffle with a skunk. Nearly a year later, that scare has turned into excitement as Peanut has been named the winner of the 2012 VPI Hambone Award by Veterinary Pet Insurance Co. (VPI), the nation’s oldest and largest provider of pet health insurance, and member of the Nationwide Insurance family of companies.

Thousands of votes were cast at VPIHamboneAward.com from Sept. 12-25, 2012 to determine a winner among the 12 nominees. As the fourth recipient of the annual award, created by VPI to educate the public about the unexpected mishaps that befall household pets, Peanut’s skunk squabble incident captured the most public votes, earning him the VPI Hambone title as the most unusual pet insurance claim of the year.

Buried Alive: Peanut’s Story
Around 2:30 a.m., first responders from the Winslow Township Fire Department in Sicklerville, N.J., apologized to Keith Wolfram and his wife Christy – they had done everything they could. Refusing to give up, Christy grabbed a shovel and continued to search for their dachshund-terrier mix Peanut, who had become buried in the dirt beneath their deck after wrangling with a skunk.

According to Keith, his dogs have had a number of disagreements with local wildlife. Peanut especially has been known to chase four-legged intruders through small openings beneath the deck in their backyard. This battle was unlike any other, however, and left Peanut buried alive in the dirt beneath their deck. After hours of searching, and several holes in Wolfram’s deck later, Christy hadn’t given up hope.

“When the firefighters saw Christy continue to dig, one of them decided to take a last look,” said Keith. “I remember him shouting, ‘I see her paw!’ and my heart just sank. By the time they got her out she was barely moving. I couldn’t believe she was alive.”

The firefighters administered oxygen to Peanut and advised Keith and Christy to get her to a veterinarian, fast. With Peanut barely breathing and reeking of skunk musk, the Wolfram’s rushed their companion to a 24-hour animal emergency facility. She was treated for hypothermia and kept under veterinary care for two days. After about a week and a half, Peanut made a full recovery – which was more than the Wolfram’s could say for their deck.

“Peanut is a perfect example of a dachshund-terrier mix, a combination of two tenacious breeds that were created to hunt game by digging animals out of their burrows and dens,” said Carol McConnell, DVM, MBA, vice president and chief veterinary medical officer for VPI. “He was just doing what comes instinctively. Peanut and all of the 2012 VPI Hambone Award nominees illustrate the unpredictable nature of our pets, and the responsibility we have as pet owners to be prepared for the unexpected.”

As the 2012 VPI Hambone Award winner, Peanut will receive a bronze trophy in the shape of a ham, as well as a VPI swag bag filled with toys, treats and an emergency pet kit. VPI swag bags also will be given to the following noteworthy competitors:

Second Place – Pebbles the domestic shorthair cat (Rio Linda, Calif.). After getting stuck in a car engine, Pebbles went on a 15-mile road trip before being taken to a veterinary hospital to treat lacerations and a broken jaw.

Third Place – Bayley the Labrador retriever (Lothian, Md.). While playing inside with his furry friends, Bayley shattered a 55-gallon aquarium that left a two-inch gash on his chest.

The 12 nominees were chosen from more than 1 million claims VPI receives annually. They were considered among other uncommon medical claims and selected by VPI as the most unusual of the bunch. All pets considered for the award made full recoveries and received insurance reimbursements for eligible expenses. For more details on the 12 VPI Hambone Award nominees, to read their claims, or see their photos and videos, visit VPIHamboneAward.com.

About VPI Hambone Award
The VPI Hambone Award is named in honor of a VPI-insured dog that got stuck in a refrigerator and ate an entire Thanksgiving ham while waiting for someone to rescue him. The dog was eventually found, with a licked-clean ham bone and a mild case of hypothermia. This quirky title was first awarded in 2009 to Lulu, a hungry English bulldog who swallowed 15 baby pacifiers, a bottle cap and a piece of a basketball. The VPI Hambone Award and these unusual pet insurance claims have since helped educate the public about the unexpected mishaps that can affect household pets. Stories and pictures of the VPI Hambone Award nominees are available at VPIHamboneAward.com.

About Veterinary Pet Insurance
With more than 485,000 pets insured nationwide, Veterinary Pet Insurance Co./DVM Insurance Agency (VPI) is a member of the Nationwide Insurance family of companies and is the oldest and largest pet health insurance company in the United States. Since 1982, VPI has helped provide pet owners with peace of mind and is committed to being the trusted choice of America’s pet lovers.

VPI Pet Insurance plans cover dogs, cats, birds and exotic pets for multiple medical problems and conditions relating to accidents, illnesses and injuries. CareGuard® coverage for routine care is available for an additional premium. Medical plans are available in all 50 states and the District of Columbia. Additionally, one in three Fortune 500 companies offers VPI Pet Insurance as an employee benefit. Policies are offered and administered by Veterinary Pet Insurance Company in California and DVM Insurance Agency in all other states. Underwritten by Veterinary Pet Insurance Company (CA), Brea, CA, an A.M. Best A rated company (2012); National Casualty Company (all other states), Madison, WI, an A.M. Best A+ rated company (2012). Pet owners can find VPI Pet Insurance on Facebook or follow @VPI on Twitter. For more information about VPI Pet Insurance, call 800-USA-PETS (800-872-7387) or visit petinsurance.com.