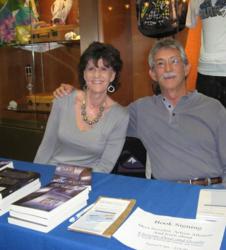 Arleen Alleman at Book Signing on a Cruise Ship

In her Darcy Farthing mystery series, author Arleen Alleman uses luxury cruising as a backdrop for her page-turning plots.

As the recent Costa Cruises accident literally makes waves in the headlines, cruise ship safety is becoming an issue of concern for many people. Unfortunately, tragic accidents are not the only safety issue for luxury cruisers: innumerable crimes go unprosecuted, since the law becomes problematic in international waters between ports.

In her Darcy Farthing mystery series, author Arleen Alleman uses luxury cruising as a backdrop for her page-turning plots. In the first book, Currents Deep and Deadly, Darcy Farthing came face to face with a vicious killer; in her new book, Currents of Vengeance, the second installment in the Darcy Farthing series, Darcy returns to South America aboard the Sea Nymph to accompany her boyfriend, Mick Clayton, a Government Accountability Office (GAO) manager, and the now unemployed Tom Smythe, a close friend of the couple and the former chief of security on the Sea Nymph to conduct a joint GAO/FBI Congressional investigation of unprosecuted crimes on cruise ships.

The team quickly encounters even more violence and madness, engrossing readers as the story unfolds on the page before them. While unprosecuted crimes at sea make for compelling fiction, Alleman’s stories are based on a very dangerous reality. On Friday, January 20th, ABC News’s 20/20 explored the topic in a special called “Cruise Ship Confidential,” and the 18 month deadline Obama set for implementing cruise ship safety in his July of 2010 bill aimed at making cruise lines more accountable quickly approaches.

Currents Deep and Deadly and Currents of Vengeance are simultaneously page-turners and timely explorations of a serious and overlooked issue, making for a series that is impossible to put down. By casting a light on some serious issues, Alleman gives her series an added layer of meaning, which, combined with the treatment of other serious topics, gives her the unique distinction of bringing depth and substance to the mystery genre.

Arleen Alleman
Arleen Alleman spent 21 years as an analyst for the Government Accountability Office. After retiring from the GAO, Alleman and her husband became avid cruisers, which inspired her to write stories set on cruise ships. In her two six-week cruises around Cape Horn; the first was spent writing her book and the second was spent doing book signings and promoting her books. For more about Arleen Alleman or to interview her visit her website http://www.arleenalleman.com/ or follow her on Twitter @AAllemanWrites or send her an email Arleenla(at)aol(dot)com