The Jurewitz Law Group is pleased to announce the inclusion of San Diego personal injury attorney Ross Jurewitz in the Newsweek 2012 Leaders in Auto Accident Law Showcase. This esteemed honor is only given to a maximum of fifteen auto accident injury attorneys in the nation who have demonstrated exceptional legal skills and are well-respected in their field of law. 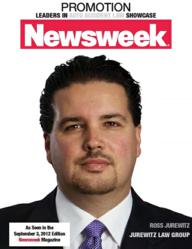 Annually, the prominent news publication Newsweek features an exclusive group of fifteen respected leaders or less in the area of auto accident law in the United States.

Honoring Excellence in Personal Injury Law
This year, personal injury lawyer Ross Jurewitz was selected for inclusion in the 2012 Leaders in Auto Accident Law Showcase, proudly featured in the September 3, 2012 issue of Newsweek. As a well-respected and nationally recognized attorney, Mr. Jurewitz was selected for his excellence and successes in the field of auto accident law. As an attorney who focuses on helping those who have been injured or harmed as a result of another’s negligence, being chosen for inclusion in this Showcase is a distinct honor and a wonderful triumph in the career of a legal professional.

Newsweek is an American weekly news magazine which is distributed throughout the U.S. as well as internationally. A distinguished news publication, Newsweek is the second largest news weekly magazine in the U.S. and aims to focus on in-depth, analytical features with original reporting on politics, world affairs, and pop culture topics.

A Tradition of Compassion and Legal Excellence
Personal injury attorney Ross Jurewitz is dedicated to representing injured people against insurance companies and those who have caused the individuals harm. He provides effective legal representation to people afflicted by car accidents, motorcycle crashes, truck collisions, boating accidents, dog bites, slip and fall accidents, catastrophic injury, and more. The lawyers at the California personal injury law firm of the Jurewitz Law Group have been recognized in prominent U.S. publications as leaders in the field of personal injury law as a result of their outstanding legal successes and resolute commitment to aiding injured persons in need.