Filmmakers making a music video or Sci-Fi movie have been adding Anamorphic lens flares to their project to stylize film. With PROMORPHIC™ from Pixel Film Studios™ editors can choose from 40 different anamorphic presets to add horizontal or verticle lens flares to the light sources in the footage. 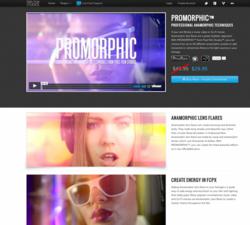 Adding Anamorphic lens flares to footage is a great way to add energy and excitment to a film. Many popular contemporary music video and Sci-Fi movies use Anamorphic Lens flares to create a stylistic theme throughout the film.

With 40 powerful presets and customiation options, PROMORPHIC™ allows users to control their Anampohic effects to work perfectly with their footage. Using simple sliders, editors can adjust the length, ray definition, color, saturation, diffusion and intensity of their light. Go from naturalistic to styilistic in the click of a button.

PROMORPHIC™ is not just a simple video composite technique. This powerful plugin analyzes their footage and works off the existing light in their film. If an object passes in front of the light source in the footage, the Anamorphic effects from PROMORPHIC™ bend and adjust with the movement.

PROMORPHIC™ was professionally designed to work inside Final Cut Pro X. Users simply choose one of the plugin from the library, select the effect they like, and use the FCPX Inspector to control the look.

Established in 2006, Aliso Viejo, California-based Pixel Film Studios is an innovative developer of visual effects tools for the post-production and broadcast community. Their products are integrated with popular non-linear editing and compositing products from Apple FCPX. All Apple, the Apple logo, Mac OS X, and Macintosh are registered trademarks of Apple Inc. in the U.S. and/or other countries. All other trademarks and trade names are the property of their respective owners.