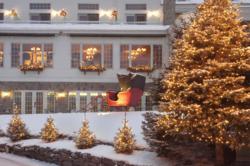 Mirror Lake Inn Resort and Spa on a wintry night

Mirror Lake Inn Resort and Spa in the Adirondack Mountains of Northern New York, has, once again, been noted by the readers of Condé Nast Traveler as one of the best in the world.

The resort has been named to the prestigious Gold List for 2013. Mirror Lake Inn also holds the coveted honor of being the longest AAA Four-Diamond property in New York outside of New York City, holding the designation for 29 consecutive years.

According to Condé Nast Traveler, Mirror Lake Inn, located in Lake Placid and nestled in the Adirondack Mountains of N.Y., is one of the “510 Best Places on Earth”. These “Best Places” appear in this month’s issue of the magazine.

Condé Nast Traveler’s annual Gold List identifies the best of the best: ¬ the gold standard of luxury travel. Every entry on this list has been rigorously tested and screened by the publication’s readers. Nearly 47,000 of the world's most discerning travelers (a record setting number) produced a final selection of the very best places in the world, by participating in the annual Readers' Choice Survey.

“Number one resort in the Northeast, first among ski hotels in the Northeast, sixth rated ski hotel in North America, and now the Condé Nast Traveler Gold List,” said hotel owner Ed Weibrecht. “For us, that’s like hitting a grand slam. It doesn’t get any better in the hospitality industry. Once again, our staff, many of them with tremendous longevity here, can take credit for this. These awards can be attributed to their dedication to our mission. These ratings continue to humble me, but our staffs’ efforts make me very proud.”

Closer inspection of the Gold List designation shows that the Lake Placid property, with an overall score of 94 out of 100, rated on the heels of The Peninsula and Trump International, both in New York City. Furthermore, as the best of New York State, Mirror Lake Inn placed ahead of any New York property located outside of New York City.

“Only with 100 percent commitment from staff and managers can you receive accolades such as these,” added Mirror Lake Inn owner Lisa Weibrecht, who personally designs and decorates the Inn adding to its allure. “To achieve all four in the same year, and do it with staff that’s like family to us and our guests, makes it even more special. To get this news at holiday time was a great gift for everyone here.”

The achievement is more noteworthy considering Mirror Lake Inn is family owned and actually operated by the Weibrechts, who are on property nearly each day.

Rather than a corporate presence, Ed and Lisa’s hands-on attention, coupled with the effort of a well-seasoned staff, is integral to the Inn’s critically-acclaimed long term success.

Mirror Lake Inn staff is now welcoming guests for the winter snow sports season, including skiing and riding at nearby Whiteface, the 1980 Olympic Mountain. The property is adorned with 100,000 lights, which creates a spectacular effect, especially at night with ample snow on the grounds. The region has received over three feet of snow since the holidays.

During that period, there were nine Christmas trees and numerous poinsettias placed around the various residences, dining areas, hotel library and sitting rooms which created an unsurpassed seasonal ambiance.

The effect was further enhanced on Christmas Eve when Inn staff led an hour of caroling, accompanied by a live pianist and flutist, and made complete with eggnog and the Inn’s famous sugar cookies.

In addition to skiing and snowboarding at Whiteface Mountain, ranked in the top 10 in eastern North America by the readers of SKI Magazine, winter activities include snow shoeing and cross country skiing on endless pristine trails; rides down the bobsled and luge track; indoor and outdoor skating on Olympic ice; snow sledding, dog sledding on Mirror Lake, horse drawn sleigh rides and snow tubing.

Guests of the Inn may look forward to skating on its private rink on Mirror Lake in front of The Cottage Café; complimentary snowshoes and trail recommendations from the staff; the heated indoor pool, whirlpool and sauna; luxurious treatments at the Spa; fitness center; Four-Diamond dining in The View Restaurant; live music in Taste Bistro on Friday nights, top rated après ski at The Cottage Café, complete with two wood-burning stoves and a weatherized deck overlooking Mirror Lake and the Adirondack High Peaks; complimentary afternoon tea with chocolate chip cookies each afternoon by the roaring fire; and gorgeous views of the lake and mountains.

Mirror Lake Inn Resort and Spa offers many attractive packages for couples and families that can be enjoyed throughout the entire winter season.

About the Mirror Lake Inn

The AAA Four Diamond Mirror Lake Inn Resort and Spa is a luxury lakefront resort in the Adirondack Mountains. The Inn, Four Diamond-rated for 29 consecutive years, offers both world-class cuisine and casual dining options, with impeccable service amid awe-inspiring views. No property in New York State, outside New York City, has maintained the Four Diamond designation longer than The Mirror Lake Inn. It is the only property in Lake Placid that combines Four Diamond lodging and dining. The Inn's renowned Lake Placid spa pampers the body and refreshes the mind with a comprehensive menu of services. The inn's owners, Ed and Lisa Weibrecht maintain a close link to the Olympic movement through son Andrew, a 2010 Olympic bronze medalist in alpine skiing; Lisa, the 1977 national champion in luge; and Ed, a member of the Olympic Regional Development Authority Board of Directors. In addition the resort recently hosted a large group from the International Olympic Committee. The inn is conveniently located one block from the restaurants and shops on Main Street in Lake Placid.