A radio program dedicated to highlighting business owners in the Western New York area touched base with Mark Andol of the Made In America Store recently and talked about his success and where he plans on going next. The show’s host, Buddy Shula, is a veteran radio personality in the Buffalo area. 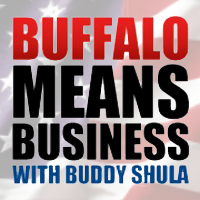 Buddy Shula, a recognized radio personality in the Western New York area, has kicked off a new radio program titled “Buffalo Means Business.” The new program will highlight local business owners and talk about how they are making it in Buffalo, New York.
Catch “Buffalo Means Business” with Buddy Shula interviewing Mark Andol, owner and creator of the Made In America Store, by clicking here! (Mark Andol's interview starts at 14:15)

Buffalo Means Business is an hour long radio program that talks to multiple business owners in the Western New York area about the struggles of owning a company and why they keep doing it. The radio host, Buddy Shula, is no stranger to being a radio host with a respectful past of radio programs. On their very first radio program, Mark Andol, owner and creator of the Made In America Store, was interviewed.

Mark Andol has a classic story of how overseas competition can easily destroy local business. In the interview, Mark Andol talks about how he had to lay off a third of his workforce in 2009 at his steel fabrication plant, General Welding & Fabricating, due to a Chinese supplier selling cheaper materials.

“We just couldn’t compete,” stated Mark Andol, owner and creator of General Welding & Fabricating and the Made In America Store. “The Chinese supplier was selling the materials cheaper than we could get them at cost.”

Andol launched his Elma based store, featuring only products manufactured in the USA, in April, 2010, as a response to his frustration that American made goods are being ignored while cheaper and, many times, inferior products were being offered to consumers. The Made in Buffalo story has ignited a national discussion on domestic manufacturing, with Andol being featured on ABC World News, Fox & Friends, Associated Press articles, USA Today, and The Wall Street Journal.

“The store is a message to the American worker, the Active Duty Military Personnel and the Veterans in our nation,” said Mark Andol. “We need to bring pride and quality back to this country. We can save this economy but it’s up to us, the people, to do it.”

Consumers and “Made In America” fans can listen to Buddy Shula’s newest radio show, Buffalo Means Business on KB1520 Saturdays at 7am or by clicking here.

“There’s an entrepreneurial spirit in Buffalo that is putting this area on the cusp of greatness and I will feature four leaders of this movement each week on Buffalo Means Business”, states Shula. “We are bringing in the County Executive for our inaugural broadcast because he is the person who can best articulate for our listeners how they can participate in this new climate.”