Marstel-Day, LLC announced today that Jennifer Graham has been named a Partner in the firm. 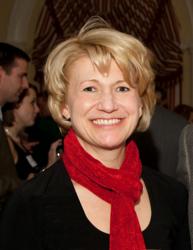 I’m honored to be joining the Marstel-Day Partnership. The core values and high ethical standards that attracted me to the Company three years ago remain my motivation for increased commitment.

Marstel-Day, LLC announced today that Jennifer Graham has been named a Partner in the firm. Ms. Graham joined Marstel-Day's principal office in Fredericksburg, VA in August, 2009 and manages the Company’s Air Force portfolio, which includes support for the Air Force Encroachment Management program (including communications and engagement/stakeholder facilitation, encroachment control planning, real estate and conservation transactions, and environmental and land use studies and analyses) and a new Public-Private/Public-Public Partnership program.

Marstel Day President and CEO Rebecca R. Rubin said: "Over the past several years, Jennifer has performed outstandingly as manager of our Air Force program, which is reflected in the dramatic increase in Marstel-Day's portfolio of work for the US Air Force. She has demonstrated exceptional leadership within the Company as well and shown a tremendous interest in staff development. The current Partners are delighted to have Jennifer join them in our partnership."

Ms. Graham said: "I’m honored to be joining the Marstel-Day Partnership. The core values and high ethical standards that attracted me to the Company three years ago remain my motivation for increased commitment. I look forward to continuing the rewarding journey we are all a part of as we bring our unique strengths to the Company's inspiring vision."

Ms. Graham retired from the U.S. Air Force with the rank of Colonel and 23 years of experience in installation command, human capital management, strategic planning, studies and analysis, and policy formulation. She effectively led organizations at base, major command and inter-agency levels, each with award winning results. Her Air Force career included assignments at the Office of the Under Secretary of Defense for Policy, Office of the Chief of Staff of the Air Force and the National Reconnaissance Office. She is a 1986 graduate of the United States Air Force Academy with a BS in humanities. She earned an MA in English literature from San Jose State University in 1992 and an MS in national security strategy from the National Defense University in 2005. She is a graduate of the Harvard Business School's General Managers Program (2002).

Marstel-Day is a third-party certified woman-owned, HUBZone small business concern that holds multiple federal prime contract vehicles. The company has additional offices in Oakland and Oceanside, CA; Alexandria, VA; Stennis Space Center, MS; Plano, TX and Colorado Springs, CO. Marstel-Day has received numerous awards for its "green" approach to environmental consulting services and was most recently awarded the AWE (Alliance for Workplace Excellence) leadership award for its demonstrated ecological leadership. Marstel-Day was recently awarded the "2012 HUBZone Corporate Citizen of the Year" award by the HUBZone Contractors National Council and named to the Inc. 5000 list of "Fastest-Growing Companies" for a fourth consecutive year.