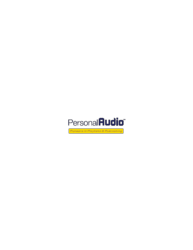 Personal Audio, LLC, has filed suit today against three companies in the US District Court for the Eastern District of Texas, Marshall Division, for alleged infringement of its U.S. 8,112,504 patent, “The Podcasting Patent.” The suits name ACE Broadcasting Network (case number 13-cv-00014), HowStuffWorks.com (case number 13-cv-00015) and TogiEntertainment, Inc. (case number 13-cv-00013) as unauthorized users of Personal Audio’s podcasting technology. ACE Broadcasting hosts the Adam Carolla Show, CarCast, and other podcasts. The Adam Carolla Show claims the record for the most downloaded podcast. HowStuffWorks.com is the Discovery Channel’s podcasting arm, hosting a number of popular podcasts, including the Stuff You Should Know and Brain Stuff podcasts. TogiEntertainment, Inc. operates the TogiNet internet radio station, which hosts the AuthorTalk, iUniverse, and many more podcasts.

"We invented the technology that enables podcasting back in 1996 as part of an effort to develop a portable and personal audio system that would offer users a customized listening experience using content and data downloaded over the Internet," said Charles Call, a co-inventor on the ‘504 patent and a member of Personal Audio, LLC. "Today, this patented technology is used by several media companies offering podcasting."

In addition to The Podcasting Patent, Personal Audio is the owner of four other fundamental media patents, as well as several pending applications, that describe technology that can be used to offer a personalized media experience using audio downloaded over the Internet.

In July 2011, Personal Audio won a jury verdict against Apple, Inc., in Texas for infringing The Playlist Patent, U.S. Patent No. 6,199,076, resulting in an $8 million judgment plus $4 million in interest (Eastern District of Texas, Lufkin Division, case number 09-cv-00111). Other defendants in the suit, Archos and Coby, settled before trial. Samsung, Amazon, Motorola, RIM, Sirius and others have now licensed the Personal Audio technology.

Personal Audio is represented by the Pitcock Law Group in this litigation.

Personal Audio, Inc., a predecessor to Personal Audio, LLC, was founded in 1996 with a mission of offering personalized audio to listeners using portable players downloading content and playlists from the Internet. The self-funded company worked to develop such an audio player that could download, store and manipulate audio files and related data. That system, described in patent applications filed in October, 1996, pioneered techniques now commonly used today in MP3 players, smartphones, tablets and other products that store and play audio and video files and work with downloaded playlists and podcasts.

The founder of the company was James Logan, an entrepreneur who previously had been a pioneer in the touch screen industry. He founded MicroTouch Systems, which became a public company and leader in the industry, and later Gotuit Media, a pioneer in the video metadata field.

In 2009, Personal Audio, LLC was founded by Logan and Call to market the innovations described in the patents. Robin, Kaplan, Miller & Ciresi L.L.P. was subsequently engaged to assert the patents against Apple, Inc. and other defendants (Eastern District of Texas, Lufkin Division, case number 09-cv-00111). The complaint resulted in a jury trial in July 2011 and Apple was found to have infringed U.S. Patent 6,199,076. Today the Personal Audio patents are licensed by a number of major consumer electronic firms.