Be the Bay Celebrates Five Years

The mantra “live it, love it, take care of it” spreads across the country from Gloucester Point, Va. 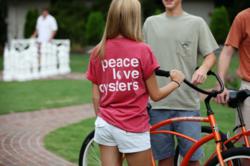 Be the Bay's 'peace love oysters' line became the Virginia company's most popular line in 2012.

Be the Bay not only means considering the Bay in day to day life, but also is an attempt for us all to build more of a sense of place around the Chesapeake region.

Following the sale of thousands of t-shirts in Virginia and across the country, and the donation of thousands of dollars to Chesapeake Bay restoration efforts, the Gloucester Point, Va.-based Be the Bay casual apparel company celebrated its fifth – and largest – year in 2012.

“Be the Bay is about celebrating the best of the Chesapeake Bay,” said President and Founder Paula Jasinski. “We’re overwhelmed by the last five years, how far we’ve come and how the community has embraced our mission – live it, love it, take care of it,”

Paula and Dave Jasinski founded Be the Bay in 2007. Both marine biologists, they wanted to create a sense of ownership around protecting the Chesapeake Bay.

“Be the Bay not only means considering the Bay in day to day life, but also is an attempt for us all to build more of a sense of place around the Chesapeake region,” Paula said.

In the beginning, Be the Bay had a handful of designs, ranging from “Have a Nice Bay” and a Deadrise workboat. Part of the designs then – and still today – include both the art and a narrative of why the item is important to the Chesapeake Bay. The Deadrise, for example, is the boat of choice of Chesapeake Bay watermen and fishermen.

“The stories are important,” Dave said. “Knowing the history of and the reason why we should care about and protect things like the blue crabs, watermen, rockfish and oysters are part of what Be the Bay stands for. And since we donate at least 10 percent of our profits to Bay restoration projects, it helps connect us all to the Bay and helping restore it.”

In 2007, Paula and Dave began selling their work at farmers markets and festivals throughout coastal Virginia. They followed up by also building retail clients around the region.

“Today, we still love going to the farmers markets because it’s where we can connect with people who love the Bay as much as we do,” said Stephanie Heinatz, Marketing Director, who partnered with Paula and Dave in 2012. “But we also have a redesigned online store, are featured in boutiques and ship Be the Bay orders across the country.”

Be the Bay’s designs and products have grown over the years, too, to include blue crabs, oysters, sail boats and rockfish. All are depicted on tote bags, t-shirts, sweatshirts, ties, polos, youth apparel and more.

In 2012, Be the Bay’s “peace love oysters” and “peace love blue crabs” were the most popular designs, with the profit sharing from the oyster shirts dedicated solely to oyster restoration.

Thanks to a partnership with P. Buckley Moss – one of America’s most prized living artists – Be the Bay expanded its online store and now offers 17 of Moss’ Chesapeake Bay-themed prints.

“We’d love to make even more of these connections and partner with additional artists and crafters around the Chesapeake Bay,” Paula said. “It’s Be the Bay for a reason. We’re all in this together.”

Be the Bay is a Gloucester Point, Va.-based casual apparel company founded in 2007.Be the Bay logo

Be the Bay features a youth line that celebrates the Chesapeake Bay.