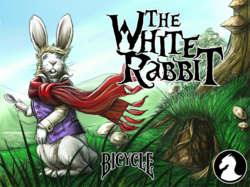 Albino Dragon has been at the forefront of creating engaging and interactive projects in the Kickstarter community.

What do caterpillars, rabbits, and Texas Hold 'em have in common? The answer is down the rabbit hole - or in this case, the cards. Albino Dragon, a tabletop game developer and publisher based in Austin, TX, is reinterpreting the classic Alice in Wonderland stories with their own customized Bicycle playing cards.

The White Rabbit playing cards are being designed by Shane Tyree, lead artist and graphic designer with Albino Dragon, who has contributed artwork to a number of projects including projects by Wizards of The Coast, Fantasy Flight Games, Alderac Entertainment Group, Ace of Spies & Genegrafter (Albino Dragon), and the wildly successful Call of Cthulhu playing cards.

“After our success with the Call of Cthulhu deck, our fans were asking for more. We love Cthulhu, but we definitely have a lot of other ideas that we’re looking forward to exploring and we hope the card community continues to support us as we embark on that journey.” said Erik Dahlman, CEO of Albino Dragon.

According to the recent launch of a KickStarter campaign to fund the White Rabbit card project "Shane Tyree has been a fan of the Alice in Wonderland artwork since he was seven years old… and has been given carte blanche once again to create a deck with his own unique vision. Creative freedom has shown us here at Albino Dragon just how deep the rabbit hole goes into the darker corners of Shane's imagination. The result is one of the most beautiful, amazing, and slightly twisted adaptations of Lewis Carroll’s works that we've ever seen."

The team at Albino Dragon has turned to the KickStarter community for funding the White Rabbit playing cards, and pledges will be used to offset the costs of production, printing, and shipping.

The KickStarter campaign was launched on 1/10 on KickStarter.com with a target goal of $7,500.

"Within the first 24 hours of the campaign we had over 378 backers and had raised more than $11,500 in pledges. We want to show that Albino Dragon isn’t just a one trick pony and I think we’re off to a fantastic start to prove it. We certainly couldn’t continue producing innovative products without the support of our amazing backers" stated Dahlman.

Albino Dragon has been at the forefront of creating engaging and interactive projects in the Kickstarter community. They regularly host Google Hangouts where they interact directly with their fans and provide a forum where some of the feedback is incorporated into the final product. Many of the cards feature the likenesses of backers that have pledged to have themselves added as part of the design.

The Alice in Wonderland-themed Bicycle playing card deck will feature some of the most iconic characters from Lewis Carroll’s works including The Cheshire Cat, The Mad Hatter, The Queen of Hearts, and of course, Alice. The deck itself will feature hand-drawn art, a unique tuck box, custom joker cards, the traditional Bicycle Magic finish that makes the brand so popular, and unique gaff cards for card tricks.

To find out more about the White Rabbit playing cards from Albino Dragon and to lend your support to the KickStarter campaign, visit the The White Rabbit Kickstarter page.