Affiorato Olive Oil is the very first olive oil of the 2012-2013 winter new harvest. Produced by Frantoio Cutrera in Sicily, Italy, and offered exclusively by O&CO., this oil is rich in flavor and tradition. 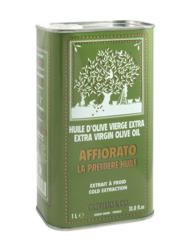 Each winter O&CO. visits olive oil producers to select the finest of the first-pressed oils of the year’s harvest, which begins in November. After the olives are crushed, the oil naturally rises to the surface of the vat and separates from the olive juice. This “floating” oil is then skimmed off the top and is called AFFIORATO. This year’s Affiorato, exclusively from O&CO., comes from Sicily, Italy.

O&CO.’s Affiorato Oil is the first “liquid gold” of the year. It is produced in Sicily, Italy by the Cutrera family. Spread over 123 acres, the Frantoi Cutrera estate has been dedicated to olive growing for several generations. Giovanni Cutrera, the head of the family, established his first mill in 1979.

This new harvest oil, selected by O&CO., has notes of white flower and fresh almond mingled with undertones of fresh cut grass and green tomato leaves. Affiorato is a superbly rich oil great on vegetables, as a finishing touch on dishes or with fish or simply used for bread dipping. Limited quantities of this exceptional olive oil are available at http://www.oliviersandco.com.

Used for thousands of years as the cornerstone of Mediterranean cuisine, olive oil possesses a unique flavor and aroma that makes it an undeniably versatile and alluring ingredient in the kitchen. Olive oil or liquid gold also offers many health benefits. Considered one of the most important components of the Mediterranean diet, this extraordinary juice from the olive fruit can help improve health. Scientifically supported health benefits of olive oil today include the ability to reduce “bad” cholesterol and can aid in lowering blood pressure.

O&CO. began when a group of photographers traveled the Mediterranean in search of the olive-growing world, its landscapes, fragrances and people. Along the way an incredible range of flavors was revealed: like wine, olive oil could be tasted and was worthy of the “grands crus” status. A groundbreaking, unique concept thus evolved, and with it the idea of creating stores to share the unsuspected flavors and aromas hidden in the olive tree’s humble fruit. Today, between tradition and innovation, the people of O&CO. draw their inspiration from the Mediterranean’s roots to share their passion for the exceptional meaning of “genuine taste.”

With a respect for tradition, O&CO. cherishes originality where tastes and smells converge to delight the senses. Emerging from the high Alpes-de-Haute, in the village of Mane, O&CO. became the brainchild of two men united around a common passion, the olive tree. Fifteen years since its creation, O&CO. has forged a new image of the olive tree, rooted in tradition but firmly anchored in the modern world. Their completely innovative concept has spread to seasonings, sauces, pastas, sweets, spreads and vinegar to bring the pleasures of the Mediterranean to you. For more information or to view O&CO.'s full line of exclusive products, visit http://www.oliviersandco.com.