Study published online today in the Journal of Clinical Investigation shows that readdition of SPARC to bladder tumors stops metastasis to lungs, where the cancer is frequently fatal 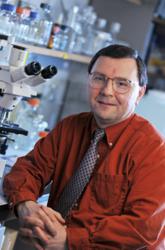 Cancer researchers are increasingly aware that in addition to genetic mutations in a cancer itself, characteristics of the surrounding tissue can promote or suppress tumor growth. One of these important tissue characteristics is inflammation – most cancers prosper in and attach to inflamed tissue and so many cancers have developed ways to create it.

A University of Colorado Cancer Center study published today in the Journal of Clinical Investigation shows that the protein SPARC (Secreted Protein Acidic and Rich in Cysteine) acts much like an anti-inflammatory drug, attempting to heal tissues inflamed by tumors. Likewise, cancers – for example, bladder cancer in this study – have developed ways to turn off the production of SPARC, thus allowing growth and metastasis, especially to the lung where bladder cancer is frequently fatal.

"In fact, we show the effects of SPARC go beyond even this anti-inflammatory role. Additionally, the protein is involved in disallowing migrating cancer cells from attaching at possible metastasis sites and stopping the production of new blood vessels needed to feed tumor tissue," says Dan Theodorescu, MD, PhD, director of the University of Colorado Cancer Center and the study's senior author.

This distinction between SPARC made in the tumor and SPARC made in the surrounding tissue largely explains previous work that found high SPARC in aggressive tumors and so suggested a possible tumor-promoting role for the protein. Instead, it seems that surrounding healthy tissue may respond to a growing tumor by increasing SPARC production, which it hopes will mute the tumor. Thus high SPARC that is in fact an attempt at tumor suppression can be coincidentally associated with aggressive tumors when the entire tumor is examined.

Then Theodorescu and colleagues turned to animal models without the ability to manufacture SPARC. Not only was bladder cancer quicker to develop in these models, but the cancer was also more likely to travel to invade lung tissue. When SPARC was added to these models, tumor growth and metastasis was reduced.

"This is a comprehensive portrait of SPARC function using human and murine bladder cancer as a model, and the first to clearly distinguish between the role of SPARC generated in the tumor and the role of the protein generated in the surrounding tissue," says Theodorescu. "We hope this provides the rational basis for further exploring manipulation of SPARC as a therapeutic intervention."

This study was supported in part by NIH grant CA143971