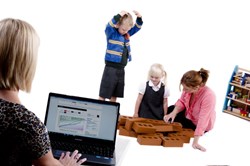 Double First is celebrating 25 years of developing and supporting dedicated management information and accounting systems to independent schools. Headquartered in the UK, with a growing base of offices in the Middle East and a wholly owned subsidiary in the Far East, the company has an extensive portfolio of products that provide state-of-the-art education and administrative data management and reporting.

Early Essence and Primary Essence are innovative new products, developed to meet a gap in the market to support EYFS and already have a rapidly growing base of customers that have been said to be outstanding by independent Ofsted inspectors. The brainchild of Bradford-based teacher Scott Parkin in partnership with web developer Adam Mawson, Early Essence to Primary Essence is an online, live data tracking system that allows nursery providers, primary schools, parents and pupils to work together to follow the progress, development and attainment of children from birth to 11 years.

Commenting of the new partnership, Double First chairman Piers du Pré said, “We are very excited to represent Early to Primary Essence to independent schools worldwide. Double First’s Education Management System, Engage, integrates fully with Essence, adding considerable benefit to all early years and prep schools. It also continues to the end of Key Stage 3, which allows senior schools to continue seamlessly with the wealth of information collected during their primary schooling. The undoubted expertise of the Early Essence to Primary Essence team will be of great benefit in all of the markets we serve across the globe.”

Responding Formative Data Solution’s Scott Parkin said “I am delighted to announce that we have appointed Double First Ltd as our exclusive worldwide distributor for our unique Essence software to fee paying and independent schools. Double First’s knowledge of this marketplace in the UK is invaluable and its infrastructure and significant relationships with overseas British curriculum schools will serve as a great base from which to launch our Essence products worldwide.”

Early to Primary Essence and Double First Engage will mark the launch by running a joint stand at leading education conference and exhibition, BETT 2013. See both companies there on stand B335 where qualified staff from both companies will be on hand to demonstrate their products.