William “Bick” Johnson of the Bald Headed Bistro in Cleveland, Tennessee, received notice in January that he would be included in the book 2013 Best Chefs America. 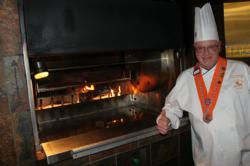 William “Bick” Johnson, executive chef at the Bald Headed Bistro, has been named as a 2013 Best Chef America in a coffee-table book to be published in March.

The executive chef at Tennessee’s famous Bald Headed Bistro is receiving national attention for his commitment to excellence.

William “Bick” Johnson – a fixture at the Cleveland, Tennessee restaurant since opening day on Sept. 7, 2004 – received notice in January that he would be included in the book 2013 Best Chefs America.

The book is regarded as the ultimate reference guide for chefs and is published each year to showcase the top chefs in the United States as selected by their peers.

“I was surprised by the honor and am very humbled,” said Johnson. “The Bistro has earned a reputation as being one of the nation’s most sophisticated high-end restaurants, but to be included on this list of the top chefs in America is something I didn’t expect.”

Johnson said the Best Chefs America book will be available online and in bookstores in March. Alongside the best chefs, the book will feature information on emerging trends in the restaurant industry, interesting ingredients and other culinary happenings in the United States.

“A night at the Bald Headed Bistro is a dining experience unlike any other and Bick deserves a great deal of the credit,” said Josh Weekley, the Bistro’s executive vice president and operating member. “Bick works hard to ensure our guests enjoy a full-range of senses, from the unique western ambiance of the Bistro to the elegant dishes.”

Weekley said Johnson joined the Bistro team after the restaurant’s founder, Allan Jones, conducted a nationwide search in 2004 to find an executive chef. Jones, a Cleveland native, has received national attention for his outspoken nature, generous philanthropy and unapologetic love of his hometown.

Johnson formerly served as executive chef for a Caribbean restaurant on the island of Saba in the Dutch West Indies and has also helmed kitchens in British Columbia, Seattle, and San Francisco.

The restaurant's elegant menu infuses the flavors and style of Jackson Hole, Wyoming into a charming Southern setting, he said.
The restaurant’s signature dish is the “BHB Filet,” which is prime tenderloin rubbed down with a secret blend of herbs and spices and then placed on a hickory, wood-fire rotisserie for 45 minutes.

“The tenderloin is then cut into 6 or 8-oz. portions, placed in a double broiler and cooked to a guest’s specifications,” Weekley said. “The filet is topped with beurre monte prior to serving. Once you taste it, you will simply never forget it.”

Johnson, a graduate of Rhodes College, originally planned on becoming a teacher. He said his plans changed after dining at an outstanding French restaurant.

“I then forgot about teaching and became an apprentice to a European master chef,” Johnson revealed. “I worked my way up to sous chef and the rest is history.”

Johnson is a member of the American Culinary Federation and is a Certified Executive Chef. He is a Chef Rotisseur with the Chaine des Rotisseurs of Chattanooga and holds the office of Vice Conseiller Gastronomique.

The Bald Headed Bistro is located at 201 Keith Street in the Village Green Town Center. The restaurant’s reservation line is 423-472-6000.