Kindergarten-Level School Subjects Made Fun And Engaging By Educational App

Learning Gems has added another app to their library, Flash Cards – Kindergarten, that provides fun gameplay and encourages learning relevant to the grade level. 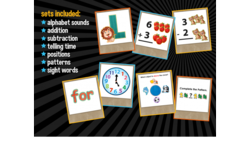 Flash Cards – Kindergarten is a vibrant, exciting app that was developed to build confidence while reinforcing your child’s comprehension and retention of grade level subjects. The app features cute characters and bright colors to capture a child’s attention and comes with a variety of subject areas to practice that keep them engaged.

While playing Flash-Cards Kindergarten, youngsters can practice addition and subtraction of numbers through 10 where figures are expressed numerically and with complimentary images that appear in multiples reflective of the numeral displayed. Telling time is another subject, as are letters of the alphabet, including both pronunciations and letter sounds. Children can also practice completing patterns, recognizing common sight words and positions, such as above or below. The varying subject areas have their own unique set of more than 185 cards. Each time a subject is chosen, the cards are shuffled and appear in a different order to further expand knowledge through repetition and memorization.

This education app from Learning Gems makes a great follow-up their earlier version, Flash Cards – Preschool, and can be downloaded for $0.99.

Learning Gems was created as a venture of Blue Fire Media, a company that designs and develops websites. In addition to web design, Blue Fire Media also devises Internet marketing strategies and SEO tactics for companies in a variety of industries.