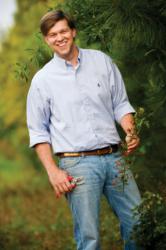 This appointment marks a momentous occasion for us...Our Society was founded by those with multifaceted talents such as James’ and we hope to return to such variety

Farmer, perhaps best known for his Wall Street Journal best-selling book, A Time to Plant, is also a gardener, floral and interior designer, cook and garden-to-table lifestyle expert. He has been featured on the Today Show, is editor-at-large for Southern Living magazine and has penned three additional books, Sip and Savor, Porch Living and Wreaths for All Seasons.

Robert Harden, Director of Advancement for the American Camellia Society, is looking forward to this partnership. “This appointment marks a momentous occasion for us,” he said, “Traditionally we have only recognized individuals for their extensive work with camellias or for their dedicated service to the ACS. Our Society was founded by those with multifaceted talents such as James’ and we hope to return to such variety.”

According to Harden, Farmer was selected for his knowledge and experience in horticulture and his passion for landscape and interior design but especially for his infectious, youthful personality.

Farmer’s hometown roots connect him to his newly granted position. He explains, “Camellias were an early influence on my horticultural interests because they are one of our family’s favorite flowers and the official headquarters of ACS is not far from my hometown of Kathleen, GA.”

James is tasked with building awareness for the Society. His rapidly growing national brand will provide exposure that will increase awareness for the ACS, boost membership enrollment, and spread appreciation for the beauty and versatility of the camellia.

For images or to set up interviews, contact Katie Dubow Katie(at)gardenmediagroup(dot)com or 610-444-3040

James Farmers' fifth book, A Time to Cook, is due this springJames Farmer