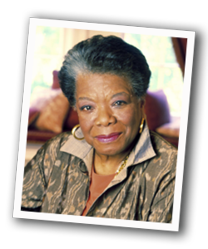 One of the greatest voices of contemporary literature, Maya Angelou, will present an Evening with Maya Angelou at Randolph College on Jan. 29 at 7 p.m.

The event is free and open to the public. No tickets are required, but seating in Smith Hall Theatre will be limited. Overflow viewing will be available.

Angelou will speak about poetry, courage, her childhood memories, as well as provide insight on how to follow in the footsteps of ancestors in order to pave the way for future generations.

Angelou, who is 84, has inspired millions with her poetry and memoirs, including I know Why the Caged Bird Sings, which received international acclaim. The list of her published verse, non-fiction, and fiction includes more than 30 bestselling titles.

A trailblazer in film and television, Angelou wrote the screenplay and composed the score for the 1972 film, Georgia, Georgia. Her script, the first by an African American woman ever to be filmed, was nominated for a Pulitzer Prize.

She has served on two presidential committees and was awarded the Presidential Medal of the Arts in 2000, the Lincoln Medal in 2008, and has received three Grammy Awards.

Smith Hall Theatre is located in Smith Memorial Building. The north and south entrances will open to the public at 6 p.m. Parking is located at various spots on campus as well as long nearby streets. Main Campus Drive will be closed for handicapped parking only. For a detailed map, please see http://www.explorerandolph.com/

For more information about the event, please see http://web.randolphcollege.edu/mayaangelou

All members of the media MUST register with Brenda Edson, director of communications, to receive media credentials. Please email bedson(at)randolphcollege(dot)edu for information. Flash photography (media only) and audio and video recordings are allowed only for the first five minutes of Maya Angelou's speech.