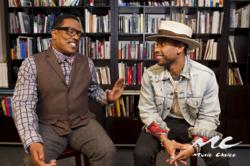 Charlie Wilson and Miguel sat down with Music Choice for a Black History Month special program available for free On Demand.

Our Past is Our Future Original Program (On Demand Premiere Date: 1/28/13) - MC sat down with R&B icon Charlie Wilson and five time Grammy nominee Miguel for a candid discussion about their music successes and major influences in their life. The documentary bridges the gap between one present icon and one future icon to witness the passing of the torch and how they have influenced each other and what the next few years looks like in their respected genres of music.

Whitney Houston: Featured Artist (On Demand Premier Date: 2/4/13) - MC has the largest collection of Whitney Houston videos On Demand. MC will showcase her talent as one of the world’s best selling artists the entire month, which coincides with the 1st anniversary of her death. Videos highlighted in the Black History Month Folder include fan favorites such as, I Will Always Love You, I Have Nothing, I Look To You and The Star Spangled Banner as well as love songs including: Run To You, I Believe In You And Me, So Emotional and many more.

Additional content will be added throughout the month. For more information on Music Choice, log on to MusicChoice.com