With The NHL Back In Full Effect, The Made In America Store Shares The Joy With A Brand New Hockey Themed T-Shirt

A brand new T-Shirt at the Made In America Store displays the love for hockey in Buffalo, New York and with the NHL lockout over, the timing is perfect. 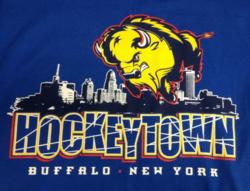 Downtown Buffalo is packed with people whenever the Buffalo Sabres play

Buffalo, New York, is a city that is known for their iconic food, cold winters and sports culture. Since the NHL lockout has ended, people everywhere are celebrating by showing their support and the Made In America Store is joining in on the celebrations by displaying their “Hockey Town” T Shirt, 100% U.S. made.

The Made In America Store carries Groceries, Clothing, Tools and more with one thing in common; each and every product is 100% U.S. manufactured. Visit their website today to find over 3,500 products produced with American products by American workers.

Western New York is proud of their hockey heritage. The Buffalo Sabres, Rochester Americans and even the Toronto Maple Leafs all have a strong fan base in Western New York. The Made In America Store is introducing a brand new T-Shirt displaying “Hockey Town: Buffalo, New York” to show the cities support.

The new shirts come in a bright blue with the Buffalo skyline in the background. Hurdling over the skyline is a gold color buffalo and underneath the buffalo says “Hockey Town: Buffalo, New York”. The T Shirts are made with 6.1 ounce high quality, heavy weight fabric that is 100% pre-shrunk cotton.

"Downtown Buffalo is packed with people whenever the Buffalo Sabres play," said Dan Andol, Made In America Store Vice President. "Small Businesses, shops and bars flourish for when you're cheering for your hometown team."

The 2012–13 NHL Lockout was a labor dispute that began on September 15, 2012. Small businesses everywhere were affected, so it came to no surprise that when it was over, the nation celebrated.

The Made In America Store is located at 900 Maple Road in Elma, New York 14059 and is the only brick & mortar store that sells 100% U.S. manufactured products. Over 350 vendors bring 3,500+ products that are all American made available in-store, online at http://www.MadeInAmericaStore.com, and by phone at 716-652-4872. Every day, Veterans and Active Duty Military Personnel receive a 10% discount on their entire purchase. Consumers and fans of the “Made In America” movement can follow the Made In America Store through Facebook, Twitter, Google+, Pinterest, FourSquare and their blog.