The Goree Challenge is a 5,000 mile solo transatlantic row from Las Palmas, Canary Islands to New York City and will begin later this year. The Goree Challenge mission is to encourage voluntary HIV testing, increase access to antiretroviral medicine for those who need them and advocate for prevention for an AIDS-free generation. 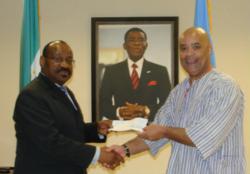 We wish you the best with the Goree Challenge and in carrying the Spirit of Malabo across the Atlantic Ocean - H.E. Anatoli Ndong Mba, Ambassador Permanent Representative for Equatorial Guinea to the UN.

The Goree Challenge received support from H.E., Obiang Nguema Mbasogo, the President of Equatorial Guinea. Victor Mooney, AIDS activist and transatlantic rower will soon get another chance for a fourth bid to row across the Atlantic Ocean later this year from the Canary Islands to New York. Mr. Mooney has lost one brother to AIDS and has another battling the disease.

With the immediate funding, Mr. Mooney can purchase an ocean row boat that’s currently in Brazil. On Sunday, he returned to St. Patrick’s Cathedral in New York where he tweeted a prayer to his guardian angel (Blessed John Paul) on World AIDS Day and asked for help.

The 24 foot custom made ocean row boat was built by Flab - Construção Artesanal de Embarcações. When the vessel arrives in New York, Kingsborough Community College and SUNY Maritime College will help get the boat ready for the Atlantic crossing and assist with Mr. Mooney’s nautical training.

On Mr. Mooney’s third attempt in 2011, his boat sank and he drifted for fourteen days in a life raft before a Greek Amver ship Norfolk rescued and transported him to Brazil. At the time, Mr. Mooney prayed to Pope John Paul II. In 2004, the Pontiff blessed Mr. Mooney on World AIDS Day at Vatican for his mission. The rower departed from Cape Verde Islands as he planned to reach New York. He continues to hope that his voyage will encourage voluntary HIV testing, increase access to antiretroviral medicine for those who need them and advocate for prevention for an AIDS-free generation.

About 1.2 million people in the U.S. have HIV, the virus that causes AIDS, and 20 percent of them are unaware they are infected. There are 53,000 new HIV infections diagnosed each year in the U.S., and 14 percent of these infections occur in 13 to 25 year-olds.

Today, an estimated 34 million people worldwide live with HIV/AIDS, with more than two-thirds living in developing countries. Nearly three-fourths of the 2.5 million new HIV infections in 2011 occurred in these countries.

Goree Challenge IV – Spirit of Malabo is a project of the New York City based South African Arts International (SAAI). SAAI has also received an unprecedented amount of in-kind and moral support from over seventy corporations, an array of governments and global health institutions.

The Republic of Equatorial Guinea (República de Guinea Ecuatorial) is the only Spanish-speaking country in Africa, and one of the smallest nations on the continent. In the late-1990s, American companies helped discover the country's oil and natural gas resources, which only within the last five years began contributing to the global energy supply. H.E., President Obiang Nguema Mbasogo has championed the fight against AIDS through preventive education, condom distribution and financing of antiretroviral medicine for afflicted populations. The Head of State also called for a shared responsibility in fighting the disease.

Last week, Equatorial Guinea opened the Fourth Ordinary Session of Ministers of Health of the Economic Community of Central African States (ECCAS). Many members of institutions in the region, as well as government officials attended. The meeting addressed issues such as diseases, vaccinations and prevention campaigns against AIDS and malaria.